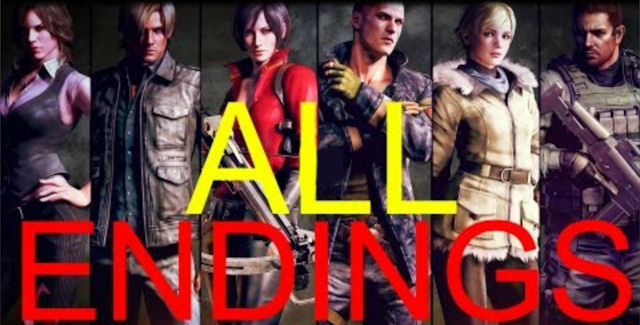 As shown in the video above, near the end of the game the ending plot can be described as:

“In Ada’s story, it is revealed that the Ada Wong that interacted with Chris and Piers was actually a doppelganger, a scientist named Carla Radames, and that the real Ada Wong was aiding Leon and Sherry Birkin while destroying the Neo-Umbrella lab in Langshiang. Although presumed dead, Carla tries one last attack against the real Ada, after having injected herself with a powerful dose of the C-virus, but is seemingly defeated. As Leon and Helena battle with Simmons, Ada reaches the lab where her clone was developed and destroys everything. She then receives a call from someone with a mission. She takes it, saying “my schedule just cleared”. Meanwhile, Leon and Helena are cleared for duty, Jake drops his asking price to a $50 instead of his original $50,000,000 price, and goes on with his new life and Chris continues to be a captain in the BSAA, overcoming his guilt. In a post-credits scene to Jake’s mission, the scene switches to an underdeveloped country somewhere, with a small boy trapped in a house by BOWs. Jake asks if the boy has his price, to which the boy passes him an apple. Jake then goes outside and proceeds to defend the boy from the attacking creatures.”

To me it looks like they are dropping some heavy Resident Evil 7 Hints.

What do you think the Resident Evil 6 endings mean?