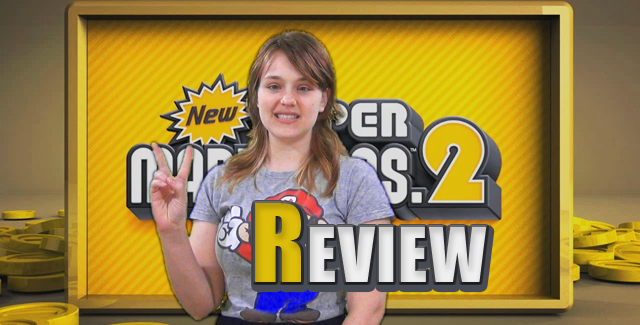 At the beginning of the game Mario and Luigi are both wearing raccoon tails and wave goodbye to Princess Peach before they fly out to gather Gold Coins. I have no idea how this makes them plumbers, but I guess dating royalty moves man up in the Mushroom Kingdom. While Mario and Luigi are focused on the bling-bling, Bowser takes advantage of their absence and has the Koopalings kidnap Princess Peach. Honestly, I can see getting kidnapped once or twice but I think by now she would’ve taken one of those self-defense courses. I don’t know maybe that’s just me.

I was lucky enough to be able to play the first New Super Mario Bros. game before I got my hands on New Super Mario Bros. 2. The style of gameplay is very similar to the first game, both being side scrolling platformers, in which Mario or Luigi have to rescue Princess Peach. Some new additions to the game includes the Super Leaf from Super Mario Bros. 3, allowing Mario to tail attack enemies and fly up into the air, which is utilized quite a bit in this game. The most helpful feature in the game has to be the Invincibility Leaf, which appears if Mario dies five times in one stage. It grants Super Leaf abilities and invincibility until the end of the level.

As expected from a Mario game, the level designs are whimsical, fun, and colorful. Even better, the 3D In New Super Mario Bros. 2 is the best I have seen on the Nintendo 3DS. What the developers did with the 3D in this game was give the players options. With the 3D turned all the way off, the backgrounds are detailed and colorful. With the 3D all the way on the foreground really pops out and the effect is fantastic. By using the 3D slider on the console, the player can control exactly how much 3-D they want and it looks good on any setting. That is completely the opposite of any other game I’ve played on the 3DS.

A lot of the music in New Super Mario Bros. 2 is going to be very familiar to Mario fans. This game shares a lot of the same music with New Super Mario Bros. Wii, and some updated versions of songs from previous games. I am sure there were a few new songs but I couldn’t pick any out specifically but I did enjoy hearing a lot of my favorite Mario songs. Of course, there isn’t much in the way of voice acting in this game and sound effects will be familiar to anyone who has played a Mario game before. There is one bit of “voice acting” at the end of the game that can get a bit annoying because it’s in a cut scene but I don’t want to spoil anything… but it’s really annoying.

I always love being super rich in video games. Probably in response to the global economic spiral, Super Mario Bros. 2 tapps into the inclination to horde wealth by having a strong emphasis on collecting Gold Coins. In this game, there are a bunch of new items solely dedicated to producing large amounts of coins. I love using the gold flowers to turn blocks into coins, this power up lets Mario throw a golden ball thing instead of little fireballs as with the Fire Flower. When powered up with the Gold Flower, Mario puts on this all gold suit and… it’s pretty hot. Another big moneymaker in this game is the gold block that Mario wears on his head, and produces Gold Coins constantly as Mario Goes through a level.

Star Coins return as collectibles in New Super Mario Bros. 2 and there are usually 3 Star Coins per level. The Star Level in this game has to be unlocked with 90 Star Coins so just to play through the game once requires the player to do some searching for hidden Star Coins. They are also useful in unlocking Toad houses or finding secret levels. There’s a lot of replay value just trying to find all of the secret levels and hidden items in this game. Aside from the solo mode there is a co-op mode, in which two players can play the same level together. There is yet another mode called ‘Coin Rush’ which puts even more emphasis on coin collecting in randomly selected levels throughout the game. The challenge being to collect 1 million Gold Coins, I say why stop at a million?

The one area where this game falls short is it’s general lack of adding anything innovative to the series. From the world map, to the music, to the levels themselves, a lot of this game is just cut-and-paste from a dozen different Mario platform games. Aside from many of the new Gold Coin collecting features, there isn’t anything new about New Super Mario Bros. 2. Far be it from me to say that it isn’t a good Mario game, it’s a great Mario game and it’s almost like watching the montage flashback episode of your favorite sitcom. You have already seen all the episodes but you also got to see some of your favorite parts again. It’s fun, even if you’ve already seen it all before.

I recommend New Super Mario Bros. 2 to any and all fans of Mario side scrolling platformer games. This game is like a catchall throwback to every great side scrolling Mario game I’ve played but with much better graphics. If you’re looking for something new and innovative to change the video game industry forever, this is not that game. New Super Mario Bros. 2 is a old standby that’s been well polished and fit together seamlessly. As always, this is a Mario game that anyone at any age can pick up and learn to play easily and have fun right away. The multi-player and easy gameplay makes it ideal to play together with a younger or inexperienced gamer. I had a lot of fun playing this game and making a walkthrough for the New Super Mario Bros 2 Star Coins.