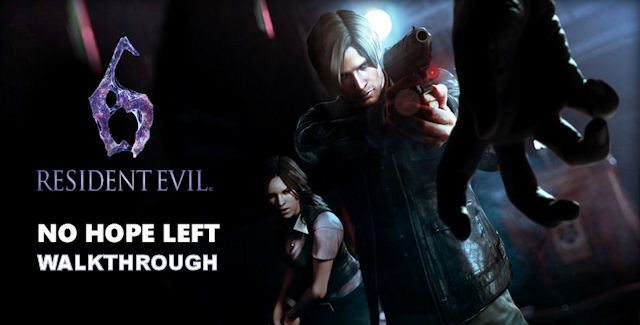 This Resident Evil 6 walkthrough will guide you through the beginning to ending moments of gameplay with strategy tips and puzzle solutions for this Survival Horror / Third-Person Shooter on the Xbox 360, PS3 & PC.

Resident Evil 6 is a Survival-Horror game that continues the struggle against the series’ signature zombie inducing bio-terror, while raising the bar with all new game additions. Players enjoy a diverse play experience, highlighted by the ability to select between four scenarios featuring multiple characters and intertwined storylines. Within these scenarios both stories and action cross paths. Additional features include zombies as well as new Chrysalide enemies, upgradable firepower and characters, vehicle based options, the mini-game based Mercenaries mode, and single-player and co-op play options.

Please note that viewers must be at least 18 to watch, so no harm comes to those with innocent eyes. This game includes Blood and Gore, Intense Violence, Nudity, Strong Language, Suggestive Themes, and lots of Creepy Zombies.

Blending action and survival horror, Resident Evil 6 promises to be the dramatic horror experience of 2012. Resident Evil favorites Leon S. Kennedy and Chris Redfield are joined by new characters, including Jake Muller, to face a new horror, the highly virulent C-virus, as the narrative moves between North America, the war-torn Eastern European state of Edonia and the Chinese city of Lanshiang. Joining this cast will be presidential aide Derek Simmons, who vows to track down Leon for his involvement in the President’s death, and femme fatale Ada Wong. But what part will Ada play as the story unravels and does she have ties to the mysterious Neo-Umbrella?

With three distinct, yet interwoven story threads, each with their own pair of protagonists for either solo or co-op play, both offline and online, not only will Resident Evil 6 deliver both different perspectives and gameplay styles but, with the introduction of the innovative Crossover gameplay mechanic players will be able to team up and share the horror. At key moments during the game, up to four players can join together online to tackle a specific situation, with some stages seeing the usual partnerships swapped to further increase the depth of gameplay.

The world is in turmoil. The C-Virus has reached pandemic proportions. The bioterror looks set to lead humanity into a terrifying end of days.
When all the goodbyes have been said and all hope seems lost, one final struggle begins.
Players can tackle the Campaign Solo, in 2-player Co-Op or 4-player Co-Op at crossover points where two pairs meet. Whatever your choice of play-style, the next chilling chapter of Resident Evil will rip your senses apart.

What does the BSAA acronym mean?

B.S.A.A. stands for: Bioterrorism Security Assessment Alliance. It’s a security agency which operates in: America, Africa, and other regions of the world. Its purpose is to protect the human race from Bio-Terrorist attacks like the one in Raccoon City.

What does B.O.W. stand for?

B.O.W. stands for: Bio-Organic Weaponry. It’s what happens when humans or animals are injected with: T-Virus, G-Virus, Las Plagas and Progenitor Virus, or C-Virus. This will result into the injected DNA (DeoxyriboNucleic Acid) mutating into a non-human form. This mutated form is mostly referred to as Zombies, J’avo or Chrysalide.

This chapter takes place in Tall Oaks, U.S.A. on June 29, 2013. Leon and Helena’s Campaign starts at the Ivy University where things go wrong after an incident with the President.

Here’s the full walkthrough video including cutscenes divided per mission for Chapter 1:

Tip: Using a health tablet near your partner will restore their health too.

Note: If you ever lose your way in a level, you can press the left shoulder button on your controller to get an on-screen arrow indicating where to go next. Very convenient!

Part 2 of Chapter 1 continues the “Escape from the campus” mission:

Part 3 of Chapter 1 with the “Get to the cathedral” mission:

Part 4 of Chapter 1 continues the “Get to the cathedral” mission:

Part 5 of Chapter 1 with the “Eliminate all enemies” and “Clear a path for the bus” missions:

Tip: You can change your Weapons by pressing to the Left or Right on your 4-Point Directional Pad and selecting/equipping the weapon of your choice by pressing Up. And by pressing Down will let you choose from your grenades or first aid spray.

Hint: Remember that there are a lot of HUD and gameplay options available in the game menus when you press on the Select button of your controller. For example, you can handily switch your weapons’ aim from crosshairs to laser aiming, as well as changing the laser color to best suit your surroundings; I usually use red for the best contrast on dark/black surroundings, but blue works well in underwater levels.