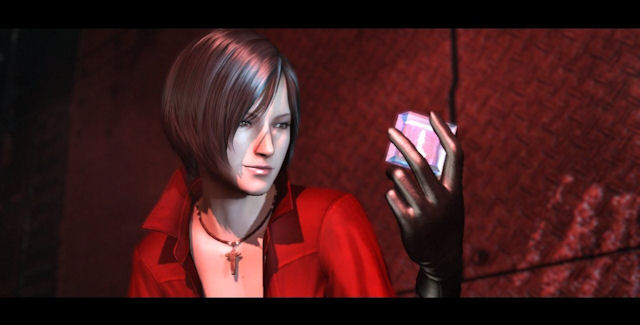 Ada Wong’s Story can be unlocked after you finish the other 3 campaign stories titled: Leon, Chris & Jake.

Once players have completed the initial three campaigns they will unlock an all new campaign featuring Resident Evil’s very own femme fatale, Ada Wong. A single player experience, Ada’s campaign features unique missions, gameplay and weapons which will provide answers to the unanswered questions from the first three campaigns.

Mid-December 2012 Update Coming: As recently announced, Ada Wong’s campaign will be unlocked from the start and have an optional player-controlled co-op partner added. It was previously necessary to complete all three other campaigns in order to unlock Ada’s story, but that’ll be a thing of the past from December onward.

New Game Plus can be unlocked after finishing the 4 campaign stories titled: Leon, Chris, Jake & Ada.

New Game+ features have been confirmed by Capcom Producer Yoshiaki Hirabayashi-san. To quote: “Weapons and Skills that you collect during your campaign can be carried over to a second playthrough to re-use them in a New Game+. This is done to give you more incentive to play the game again. This is important because the harder the difficulty level, the harder you’re going to have to fine-tune your skill management, as you have to choose the right skills for the right job.”

Unlock Infinite Ammo for All Weapons

To unlock Infinite Ammo for all weapons, as well as Dog Tags, you have to finish Ada Wong’s Campaign Story. This will give you the Unlimited Ammo Skill to equip for each weapon you want Infinite Ammo on.

Here’s how to unlock all Mercenaries Mode characters and costumes. Since only Leon, Chris & Jake are unlocked by default, you’ll want to make Helena, Piers, Sherry, Ada & Carla available for play. The unlockable new maps are included in the list as well.

This video shows all the Characters & Costumes that are available in Resident Evil 6 Mercenaries at launch:

Once you complete one of the Resident Evil 6 Campaigns, you will unlock Agent Hunt mode; complete all three Campaigns to unlock their respective stages. This mode lets you infiltrate other players’ games and hunt them down as mutating J’avo enemies! Sneak up on real-life players and stop ’em in their tracks! Don’t worry, if you don’t want people stomping through your Campaign, you can turn the feature off.

There is a general stamina recovery trick that works on ALL players. Holding aim, dodging so your grounded, then stay in place.

There is a trick that can be performed to give Jake stamina back quicker. If stamina is depleted simply perform his hand to hand dash by holding on to the aiming button (while unarmed) then holding the fire button. Jake will hold the rear back pose, and his stamina will quickly fill back to normal. – Handy tips from Kijuku!

Do you know of any other Resident Evil 6 Cheats or Unlockables?
Let us know in the comments, you’ll get credit for finding out. – Thanks for visiting!