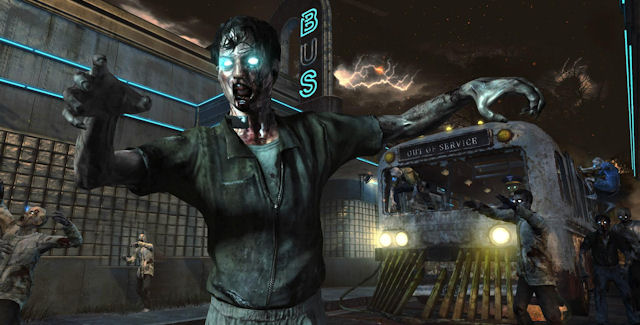 Activision has been dropping hints about Call of Duty: Black Ops 2 – Zombies Mode for a while now, but now they’ve confirmed it’ll be part of the game. Better yet, they are adding a Zombies Campaign to the game!

As part of the unveiling of Call of Duty: Black Ops II Zombies, developer Treyarch wanted to first take a look back at where the game mode has come and gone. What started out as an unlockable Easter Egg in Call of Duty: World at War has evolved into its own narrative, complete with a unique cast of characters, diverse set of locations, and “wonderful” arsenal of weapons. In the game features it’s described as: “The inclusion of a Zombies in gameplay, both in as an option in multiplayer, and as a campaign option.”

The new trailer reveals where Zombies can take us next, it asks: “Who’s ready to help repel the zombie infestation?”.

Are you ready to kill some zombies in Black Ops 2?