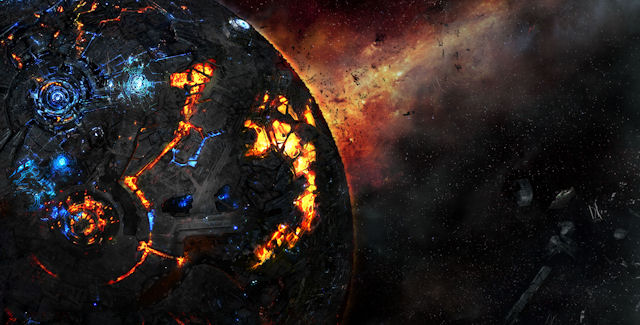 During the ending you have the choice to choose between Megatron or Optimus Prime in the final boss fight, but story-wise the outcome is the same no matter who you choose.

As shown in the video above, near the end of the game the ending plot can be described as:
“Grimlock then notices another Space Bridge tower that Shockwave has constructed nearby. Grimlock fights his way to Shockwave, knocking him from the tower and destroying it. The crumbling tower falls and the portal in Cybertron’s orbit begins to decay. Before the launch, Metroplex transfers all of his Energon to the Ark and sacrifices himself in the process. Optimus then calls for the launch of the Ark to try and make it through the portal before it closes, but Decepticons arrive in the Nemesis to stop him. Soundwave leads the first wave of troops onto the ship through giant cables and destroys the Ark’s automated defense system. Jetfire is then launched into space to disengage the cables. Bruticus launches from the Nemesis and destroys the Ark’s fuel line before being blasted off the ship into empty space by Jazz and Jetfire. Nearby Megatron and Optimus engage in battle. Before a winner can be declared, Optimus and Megatron are pulled off of the hull of the Ark and pulled with both ships into the portal, where it finally closes to leave their home planet alone and quiet.”

Thanks for the video to XCV & for the description to Wiki.