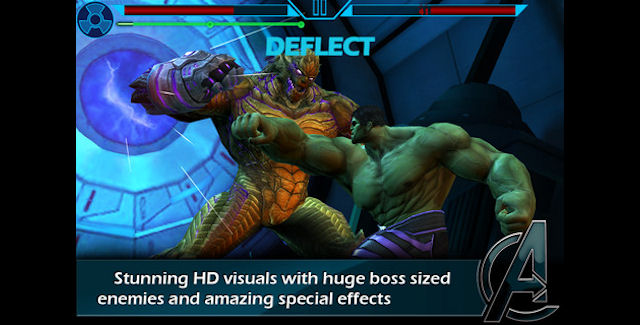 Here’s a Avengers Initiative Video Game review for the iPhone/iPad game that comes to iOS & Android touch screen devices. Track down and defeat some of the world’s most notorious villains like Wendigo, Abomination, Kronan, and the Skrulls, and help the Avengers pull the world back from the brink of catastrophe.

The 1.05 GB app is universal, so one purchase gets you versions for both the iPad and iPhone. Avengers Initiative Video Game is available on the App Store for $6.99.

So essentially Avengers Initiative is Marvel’s version of Infinity Blade for fans of The Avengers.

Watch the official launch trailer for the first installment of Marvel’s biggest cross-over mobile gaming event yet: “Avengers Initiative.” Level up, gear up, and fight as Hulk in the first adventure of an episodic series built exclusively for touch screen devices.

Graphics: Nice graphics on the latest iOS devices. Nothing extraordinary. B-

Sound: Hulk sounds like Hulk during battles. Decent sound throughout. B

Replay Value: It will certainly last a while with the upgrade system. Will it keep your attention is the question, these types of games are repetitive and this brings nothing new to the table. C+

Overall (not an average): C+