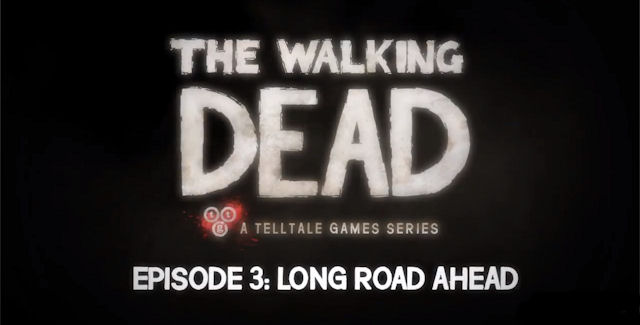 This The Walking Dead Game Episode 3 walkthrough will guide you through the beginning to ending moments of gameplay with strategy tips for this Horror Survival Adventure game on the PC, Xbox 360, PS3, Mac & iOS.

Telltale Games brings the world of Robert Kirkman’s award-winning comic book series The Walking Dead to life in this third video game in a 5-part series. This third part is called “The Walking Dead: Episode 3 – Long Road Ahead”.

Let’s first watch a RECAP of The Walking Dead Game: Episode 2 to see all the different choices everyone made in the previous episode! Did you kill Jolene, Larry, Danny and/or Andy?

Things go from bad to worse for Lee Everett and Clementine as they decide to try and escape from Macon.

Let’s start the walkthrough with the “Ghost Town” part of Chapter 1.

Chapter 3: Mystery at the Motor Inn

Chapter 4: Argument on the Road & The Train Wreck

Chapter 4 begins with an “Argument on the Road”.

Note: I’m sorry to say there is no possible way to avoid Carley (or Doug if you saved him in Episode 1) from getting shot. 😥