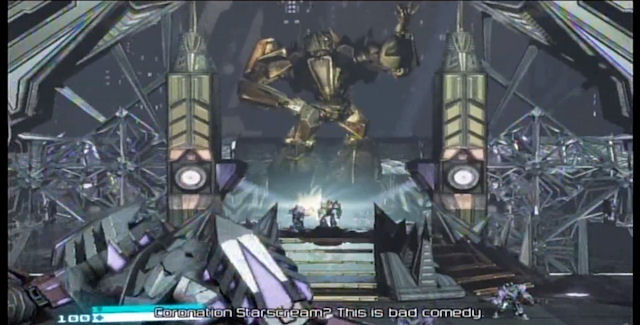 Note that this achievement/trophy won’t unlock until the end of the fight with Starscream’s minions and Starscream himself.

The in-game locations for the Starscream Images & Statues are shown in the guide below.

Destroy 7 big and small monitors with Starscream’s Image on them, as well as shooting the 2 golden Starscream Statues (not all four can be destroyed) by firing at them at least two or three times until they are destroyed down to the legs. The Statues to shoot are the one inside the building and the one behind Starscream himself.

This video guide shows you where all of the Transformers Fall of Cybertron Starscream Images & Statues locations are in-game.

Thanks to Deathmule for the guide video.

Please comment if you have any Transformers Fall of Cybertron Starscream Images & Statues location tips of your own, we’ll give you credit for it. – Thanks for visiting!