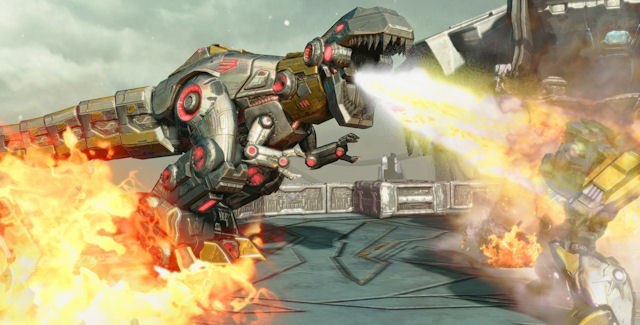 Publisher Activision and developer High Moon Studios have announced the Transformers Fall of Cybertron DLC the new third-person shooter game will receive. The first downloadable content will be available from launch week and they will be providing more DLC into September 2012!

Download this pack to get 5 new characters and their associated parts for use in Customization for Multiplayer, they include: Wheeljack, Ultra Magnus, Blast Off, Perceptor, and Zeta Prime.

Here’s a video of a fan showing off the Havok Multiplayer DLC.

It’s a 4 multiplayer character pack, it’ll include the unlocks for: The legendary Dinobots… Grimlock, Swoop, Slug, and Snarl, to change the course of battle.

Dracorex78 explains that Sludge – the mechanical Apatosaurus – isn’t included in this DLC, because Dinobots’ Sludge died in the sea of rust in the game at the first part of Jazz’s level.

It’s a variety pack of multiplayer and single player characters, it’ll include a handful of new characters like: G1 Retro Optimus Prime and Sharpshot.

Are you interested in the newly announced Transformers: Fall of Cybertron DLC?