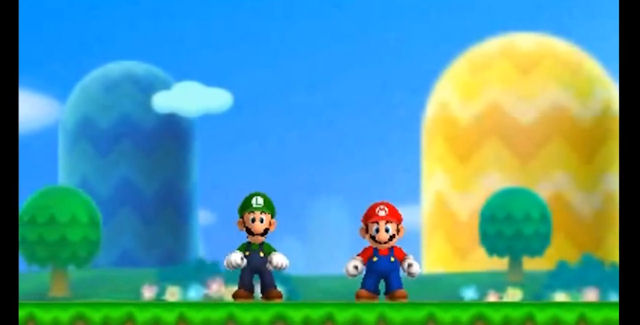 Looking for New Super Mario Bros 2 cheats and tips for Nintendo’s new platformer 3DS game? Here are some unlockables including fun cheats & codes. This guide includes tips and hints on how to unlock Luigi to be playable, how to unlock the 3 Special Worlds, how to earn infinite lives / unlimited extra 1UP’s, and more cheat codes to secret levels.

You can do the 1UP trick to get unlimited lives by finding a Koopa Troopa coming down a set of stairs near the first Star Coin in World Mushroom-1. It’s the same trick that’s been in every Mario Bros. game since the original NES one, the only difference being that in NSMB2 you cannot be Gold Mario when performing this cheat or it won’t work. Technically it can be done in any level where you see a Koopa Troopa or any enemy with a shell on its back walking down the stairs.

Position Mario (or Luigi) on one of the steps of the stairs that the Koopa Troopa is walking down on. You have to jump on top of the Koopa Troopa coming down the stairs at exactly the moment when he’s near the end of the step you were standing on (while not pressing the jump button when you hit it), so that the Koopa Troopa’s shell will continously ricocheted off that stair step’s wall and under Mario’s feet. Mario then automatically continues to jump on the Koopa shell, and the Koopa shell in turn will bounce off the wall, making it so that Mario (or Luigi) keep jumping on it. Then the extras lives will pile up to infinite!

When all is said and done, you’ll probably end up collecting so many coins that by the end of the game you’ll have 100’s of lives without needing any cheats.

How To Unlock Luigi As A Playable Character In Single Player

If you want to unlock Luigi in New Super Mario Bros. 2’s single player mode to play through the levels as him, then you’ll first have to have finished the game by defeating Bowser at the end of World 6.

After that’s completely done, go the the game’s save file select screen. When you’re there do the following: Hold down the L and R shoulder buttons while selecting the save file you want to play in with the A button. That’s it! You’ve now successfully unlocked Luigi as a playable character! Luigi will confirm “It’s Luigi time!”

What Happens When You Collect 1 & 10 Million Coins?

Collect 1 Million Coins: After collecting 1 million coins in all the game’s modes together — as shown in the total tally counter that’s visible everywhere — Mario & Luigi will tell you that you are “INCREDIBLE!”

After you collect 1,000,000 coins, Nintendo has confirmed your reward will be: A new title screen with a Gold Mario Statue and stacks of coins on it.

Collect 10 Million Coins: After collecting 10 million coins in all the game’s modes together, you’ll notice the coins counter maxes out at 9,999,999 coins! — The game then confirms “The coin counter doesn’t go any higher! You’re THAT good.” and Mario & Luigi will once again tell you that you are “INCREDIBLE!”

After you collect 9,999,999 coins, your reward will be: Another new title screen with a Gold Raccoon Mario Statue on it.

The below video show some great Coin Rush mode methods to gain coins quickly. It took the player 10 days to get 10 million coins, by playing 5 to 6 hours to get 1 million each day!

For the record: Everyone thinks these are both boring rewards.

How To Unlock The Special Mushroom World

How To Unlock The Special Flower World

Before you start, you have to have a Mini Mushroom before entering (via a Mushroom House or from level 3-B), because only Mini-Mario can access the secret exit.

When playing that Fortress level, you’ll be able to find the secret exit like this:
1) Go to the mid-level checkpoint area, right below that area when you see the checkpoint flag on your screen, in the bottom-right corner is a mini-pipe that only Mini-Mario can enter. This leads to the secret exit.
2) A second way to reach is it by finishing the Mushroom World’s Cannon level. Which, as expected, only gets unlocked when you find the secret exit in Mushroom-Ghost House, which leads to Mushroom-B, so finish that to reach the cannon there.

How To Unlock The Special Star World

To unlock the secret Star World, you have to finished World 6 all the way until after the Bowser boss fight, then the game will tell you “Star World has appeared!”

But wait! You’re not quite done. Go to the Star World by selecting it from your touch screen’s worlds overview. When you reach it, you’ll find out you can only open the path to the Star World’s first level by paying a 90 Star Coins fee!

How To Unlock The 9 Rainbow Levels

To unlock the 9 secret Rainbow Levels, you should first know they aren’t on any of the overworld map’s paths at all! You can unlock them by playing any level on each World. And there’s only 1 Rainbow Level per each of the 9 Worlds in New Super Mario Bros 2.

Here’s how to make each World’s Rainbow Level appear: Play any level you want. Make sure at the end of the level when you jump onto the flagpole, the time counter in the top-right corner of your top 3DS screen has the last two digits that are the same as the World number/count you’re in! (For the first of the three digits in the counter it doesn’t matter what it’s at.) Fireworks and a rainbow will appear on the endscreen of the level to indicate you were successful.

Next, the newly opened Rainbow Level will show up on the overworld map for you to enter.

Note: You can only play each World’s Rainbow level one time when you opened it. You’ll have to unlock it again to play more of it.

Here’s a video guide going through all Rainbow levels.

How To Unlock Unlimited Mushroom Houses

If you want to have unlimited Mushroom Houses in each overworld map, then you’ll first have to have finished the game’s 3 Special Worlds by defeating the final boss level at the end of World Star.

After that’s completely done, go back into the game and you’ll have unlimited Mushroom Houses. Thanks Toad!

How To Unlock Coin Rush Mode

You may notice that the brand new Coin Rush Mode isn’t available from the start of the game. Don’t worry, this isn’t a glitch/error in your copy of the game, you actually have to unlock this mode.

To unlock Coin Rush Mode you have to finish the World 1-Castle level or the World 1-Cannon level. Shouldn’t take a Mario Master like you too long.

How To Get 5 Stars On Your Save File

To get 5 shiny stars on your save file, you’re going to have to unlock pretty much everything in New Super Mario Bros 2 and never use an Assist Block.

Warning: To get the 5 stars to SHINE & GLITTER on your save file, do NOT use Assist Blocks that contain an Invincibility Leaf for a White Raccoon Mario suit. They appear after you lose 5 lives in a level, and it’s ok if they appear, as long you don’t use them.

For you to check this hard-to-get star requirement, here’s all Secret Exits in NSMB2 on video:

Jagger adds a handy time saver tip for those of you who want the 5th star, but have only 4 stars and think they’ve done “everything”. To quote: “I just found the last exit in the form of the Coin Boat in World 5. I didn’t jump the Black Flag Pole, only the Red Flag Pole and forgot about it.”

Do you know of any other New Super Mario Bros 2 cheats, tips or unlockables? Let us know in the comments, you’ll get credit for finding out. – Thanks for visiting!