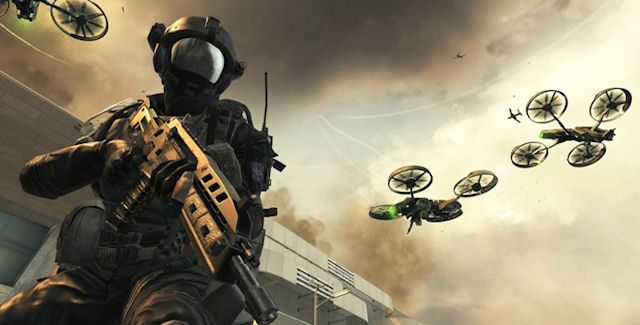 The Black Ops 2 Multiplayer Hands-on debut was just announced: “Starting day one of Gamescom on 15th August, attendees can go to the Call of Duty: Black Ops II booth located in Hall 6, booth A21/B30- A31/B30 to compete in the massive Call of Duty Multiplayer arena and go hands-on with award-winning developer Treyarch’s new title.” Last year, Gamescom in Germany received over 275,000 visitors, so expect it to be busy.

Set in the year 2025, Call of Duty: Black Ops 2 brings players into global conflict featuring advanced weaponry, robotics, and drone warfare in a new Cold War scenario whose seeds are being sown in today’s headlines. Translation: You get to control lots and lots of high-tech drones on land and in the air!

Apparently if you Pre-order Call of Duty: Black Ops 2 before the November 13th, 2012 launch, you’ll receive a bonus multiplayer map called “Nuketown 2025” for free. It’s described as: “Relive the close quarters chaos of this classic fan-favourite map, reimagined in a visionary depiction of the ‘model home of the future’.”

How does the Call of Duty: Black Ops 2 Multiplayer reveal look to you?