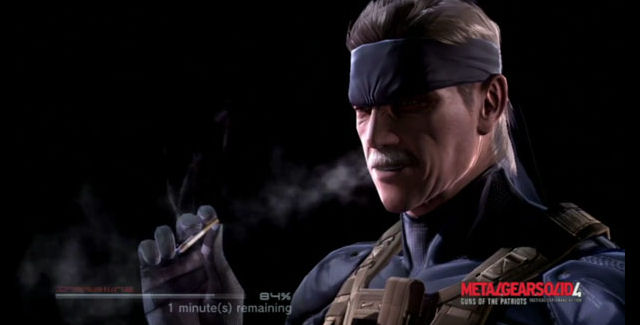 The Metal Gear Solid 4 Trophies guide lists every Trophy for this PS3 shoot ’em up game and tells you how to get and unlock them. Konami had finished development of Metal Gear Solid 4: Guns of the Patriots before trophies were implemented on the PS3 back in 2008, but today to celebrate the 25th anniversary of the Metal Gear series, they’ve released an update that adds trophy support! 😀

Tip: For those of you who already finished the game the downside is that… you will have to start a new game entirely to obtain any of these trophies. You do NOT have to delete your old save data, but you must obtain every item, ipod track, camo type, etc. (again) the good old fashioned way, by playing a lot.

2. You enjoy all the killing, that’s why. (Bronze) — Killed many enemies in one area, and vomited.

This can be done in Act 2: Solid Sun after the bulldozer cutscene at the Mansion. Shoot the endless respawn supply of PMCs (50 enemies to be exact) to unlock the trophy. As you can see from the video guide, right after you get 50 kills the voiced dialog and vomiting scene follows.

4. Hands Up! (Bronze) — Held an enemy soldier at gunpoint and performed a body check.

This can be done early in Act 1: Liquid Sun by sneaking up and pointing a gun at a PMC, then get in front of him to frisk him with Triangle button a few times.

You have to find the 5 dolls/statues from the 4 Battle Beauties and the 1 Frog Soldier/Haven Troopers one in Stage 1. Most importantly, you must get them from their idols (in beast form, not beauty form) by using non-lethal means! And grab the dolls/statues before killing their idol’s beauty form.

9. I am THE expert on weapons (Gold) — Obtained all weapons (excluding weapons obtained via password).

12. Can you feel my power now!!!? (Silver) — Took control of an enemy soldier’s body using the Mantis Doll or Sorrow Doll.

This can be done at the start of Act 2: Solid Sun. Buy the Emotion Magazine from Drebin’s Shop. Go down to the hut with the PMC/enemy soldier who is looking at a Playboy magazine inside the hut. Drop the magazine in the path of the PMC walking around the hut and he won’t be able to resist looking at it, haha.

This can be done at any time in the game when you’re on the battlefield with an enemy.

15. Drum Can Addict (Bronze) — Knocked an enemy soldier flying using a Drum Can.

This can be done at any time you’re in the field, but at the earliest is in Act 1: Liquid Sun after you get the drum can. Find some PMCs (one or more enemies) and roll into them to unlock the trophy.

17. You’re pretty good. (Silver) — Got kissed by Ocelot during the final battle.

During the final boss battle when Ocelot tries to grab you, let him, and he’ll try and choke you out. At the same time the screen will tell you to move your left thumb stick left to right and back repeatedly… DON’T DO THAT. Let Ocelot choke you for a while and then he’ll come in and kiss Snake, haha.

18. That Tune Is His Mind Control Music (Bronze) — Played Oishii Two-han Seikatsu and made one of the BB Corps dance.

Here’s what is suggested you do: Use the Mk.II Silencer Pistol as well a few Stun and Smoke Grenades and NEVER shoot a Frog when they are on walls, because if they fall, it counts as a kill. As you can see in the video guide it’s best to run around and use the Mk.II when the Frog soldiers are on the ground. Use a Stun and Smoke Grenade as the Bulldozer brakes through the wall at the very bottom of the Hotel. There are three levels you have to work your way down when doing this trophy. The actual Frog Doll is in the garage after the cutscene with the Rat Patrol.

30. Handle with Caution (Bronze) — Broke off the most important part of a statue.

The location to unlock this trophy in is when you enter the Red Zone in Act 1: Liquid Sun, you’ll then immediately see the statue. Jump up and grab the marble statue’s pee-pee a few times by pressing triangle a few times.

This guide is a work-in-progress. Please let us know where you need help, so we know where to expand the guide. It’s been 4 years since I finished the game, so my memory’s a bit rusty heh!

Please comment if you have any trophy unlock tips of your own and we’ll give you credit for it. Thanks for visiting!