Why New Super Mario Bros 2 Is All About Coins 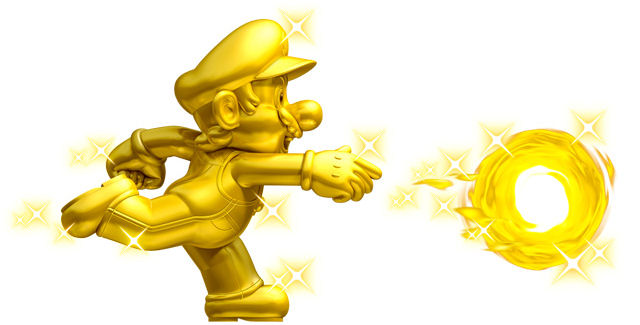 As the New Super Mario Bros. 2 commercial showed, the game — at one point titled New Super Mario Bros. Gold — is all about collecting gold coins. Mario HIMSELF even turns into Gold Mario (shown above) for a limited time whenever he picks up a Fire Flower offshoot called the Gold Flower that allows him to shoot golden fireballs that turn every block they touch into more gold coins! Midas touch, what’s that? Gold Mario’s where it’s at!

Although it might seem odd for a Mario game to be all about collecting coins, Nintendo are promising something secret will happen when you collect 1 million coins in-game. Hence, that’s the game’s main goal, your running total number of collected coins is tracked for all modes together. Oh and don’t worry, Princess Peach gets kidnapped by the Koopa Kids again, so technically the story here is that Mario & Luigi have to save her AGAIN. 😆

So how did it came about that New Super Mario Bros. 2 is all about the coins? The newest Iwata Asks interview sees Nintendo president Iwata ask the game’s creators to explain why it’s all about the gold coin! It turns out, making the theme gold and collecting the coins ‘felt right’ and the more they focused the gameplay around it, the more fun level ideas they came up with, so they stuck with it. Read on for more details…

Iwata: Now I’d like to ask about how the theme of this game—one million coins—came about.

Amano: All right. It started early on in development when we were determining the structure little by little in order to make the stages fun, and for some reason Nakago-san and Tezuka-san kept talking about coins.

Iwata: They were muttering about coins? (laughs)

Amano: Yeah, like, “Shouldn’t this one be About Coins?” (laughs)

Amano: They were both going on about how good it felt to get coins. It was just about the time that Super Mario 3D Land was finishing up, and in that game Mario can put a Question Block over his head.

Iwata: And if he runs around like that, coins come popping out.

Amano: I got a request to adopt that in New Super Mario Bros. 2. I was like, “So, uh…coins come out of his head?”

Iwata: It didn’t quite make sense to you at the time.

Amano: No. I mean, only a few coins came out at first, and I thought, “That isn’t very satisfying,” so we made it so that if you dash, coins come out like crazy. I had Tezuka-san try it out and he was thrilled, saying, “This is great!” and “You can make all kinds of stages like this!” (laughs)

Amano: For the most part, only players with confidence in their skill can experience how good it feels to run through Super Mario in a dash, but I thought that if a bunch of coins come out when you do, it feels great, so more people will feel like tearing on through.

Iwata: It would feel great to get coins just by dashing.

Amano: But that was something adopted from Super Mario 3D Land, and I didn’t like just copying it, so I made a golden Koopa Troopa. If you stomp on and toss one, coins scatter around.

Amano: Around that time, when Tezuka-san and Nakago-san had one of their usual lunches–

Amano: Yeah. He came back from one of those lunches absolutely brimming with joy and said, “How about one million coins?!” (laughs)

Iwata: So all that muttering about coins suddenly increased to one million? (laughs)

Iwata: Oh, just in time, the “How about one million coins?” person walks in!

Iwata: We were just talking about how you said, “How about one million coins?”

Iwata: Why did you decide on a million coins after coming back from lunch?

Tezuka: Not really, no.

Tezuka: I thought if players were going to collect them, then an astounding number would be better.

Iwata: Amano-san, what did you think when you heard one million? I bet you thought, “That’s ridiculous!”

Amano: I thought it was a good number to shoot for. I, too, thought, “It’ll work out somehow.”

Amano: Tezuka-san and Nakago-san came over to development and were putting lots of coins around the stages, so I thought, “Maybe we really can reach a million.” And then at some point, we set one million coins as our goal.

Iwata: But if you do that, then you have to make all kinds of things related to coins.

Amano: We mentioned Koopa Troopas earlier, and at first, the only thing to become golden was the Koopa Troopas. Koopa Troopa hops through a Gold Ring and turns gold for a limited time, and I was satisfied with that. But then the designers said, “Why don’t the other enemies become gold, too?” (laughs)

Ishikawa: If we were going to do one, then…

Amano: And we made Bullet Bill gold.

Iwata: So this time, all sorts of stuff turn into gold.

Ishikawa: And then the screen…

Iwata: It gets filled with gold.

Ishikawa: The designers were worried that it would begin to look gaudy.

Iwata: They were worried that with too much gold, it might look tacky.

Ishikawa: Yeah. But the final visuals actually gave a luxurious impression and were simply pleasing. I thought, “This is great!”

Iwata: Ishikawa-san, I bet in all your time as a designer, you’ve never drawn so many coins or used so much gold!

Ishikawa: You can say that again! (laughs)

Iwata: The new power-up where Mario turns into gold all over.

Amano: One of the programmers suggested this idea, in past Mario games there was the P-Switch and by stepping on it the blocks would turn into coins. I was suggested that by using this mechanic we may be able to make a Mario power-up that would make it easy to collect coins. And when we made it, it felt great. From there we talked about making a new power-up.

Amano: What felt really new this time was that the programmers had a lot of ideas that helped steer the direction of the game.

Iwata: That’s probably because there was the primary objective of collecting coins. Everyone focused on it and a lot of ideas came out.

One thing’s for sure, though… considering every 100 coins you collect you still get an extra life – like in every other Mario game – that means there won’t be a shortage of 1UP’s. I imagine in the tougher levels later in the game we’ll need ’em!

Read the full interview at Nintendo.com.

Do you think you’ll get to 1 million coins in New Super Mario Bros 2?