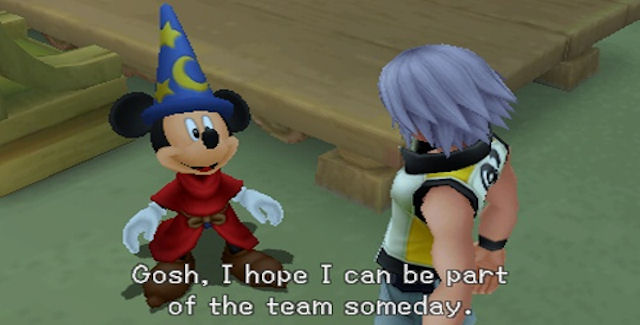 Kingdom Hearts 3D’s secret ending shows Yen Sid talking to Mickey that (for Kingdom Hearts III) he’s planning to bring together the 7 Keyblade wielders — these likely are Sora, Riku, Kairi, Ventus, Aqua, Ventus, Mickey, and Lea or Terra — needed to fight the 13 Darknesses. This in order to:
A) Defend the 7 Hearts of Pure Light (the 7 Princesses),
B) To combat the new Organization XIII,
C) To prevent Xehanort from getting the 7 Pure Hearts of Light in order to complete the X-Blade and starting another Keyblade War.
That’s why Yen Sid has requested Riku bring Kairi to him, so she can be trained to wield the Keyblade she received from Riku (in Kingdom Hearts II).

How to unlock the Kingdom Hearts 3D secret ending message?

To get the secret ending message you first have to finish the game on any Difficulty Mode. Then during the game’s ending credits — while you’re controlling Sora in Drop Mode — you must collect all the glowing golden letters in some people’s names as they fly toward you (you do this by touching them).

After completing that task successfully during the ending credits, the screen will tell you: “Secret Message Unlocked”. Then at the end of the credits, you have to save your clear game data. Next, reload this new clear game data file and open the Main Menu, from there you can go to the “Memoire” section. It’s there you can view the secret message. Have fun!

Thanks for the video to Hassan & for the tips to Keisuke.