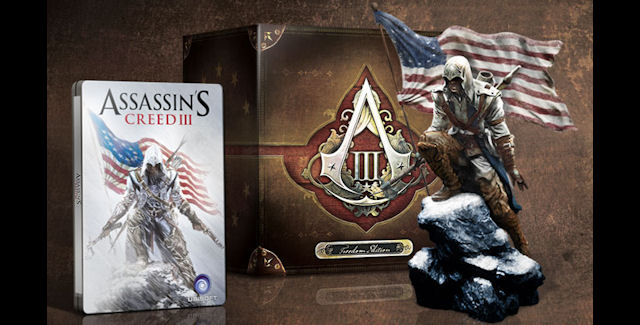 Discover the European Freedom Edition with this Assassin’s Creed 3 unboxing video. No doubt versions for the Collector’s Editions in other regions will follow in the near future.

Included in the box are a high-quality figurine, George Washington’s secret notebook, in-game content… No doubt it has what it takes for you to RISE to the Revolution!

The Assassin’s Creed 3: Freedom Edition includes all of the following:

– A 24-cm high-quality figurine of Connor

– George Washington’s notebook revealing all the truth & secrets about the Assassins and the Templars during the American Revolution.

o Lost Mayan Ruins: Connor’s mission leads him in an old Mayan pyramid, full of mysteries and revelations. Players will be able to unlock Captain Kidd’s fabled cutlass, a deadly, brutal and beautiful piece of steel

o Ghost of War: The tide of the Revolution turns into the Templars favor. Defeat your enemies and unlock The Pontiac’s War Club, a powerful Native American weapon.

I’m definitely picking up a Assassin’s Creed 3 collectors edition! Assassin’s Creed is one of the few game series where I want to get the extra figurine, movie, music, artwork or DLC. How about you?

Are you getting one of the Assassin’s Creed 3 collectors editions?