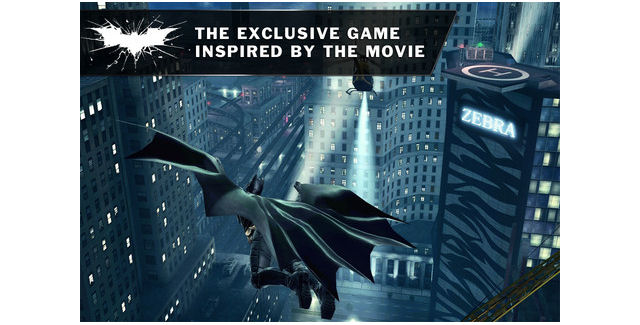 Here’s a review for The Dark Knight Rises Video Game (Batman) for iPhone/iPad that comes to iOS & Android in conjunction with the highly-anticipated blockbuster movie. Retake Gotham City from super villain Bane and restore justice.

The 1.5 GB app is universal, so one purchase gets you versions for both the iPad and iPhone/iPod Touch. The Dark Knight Rises Video Game is available on the App Store for $6.99.

Note: It’s recommended you watch the movie before playing the game, as to avoid possible storyline spoilers.

The Dark Knight is on its way to your smartphone. Be ready for the exclusive video game inspired by the movie. Watch the trailer.

Sound: Good voice acting that sound like their big screen counterparts. Decent theme music throughout the game. A-

Replay Value: Powering up will keep it interesting and the game’s only mode will keep you busy for hours. No multiplayer. B-

Overall (not an average): A