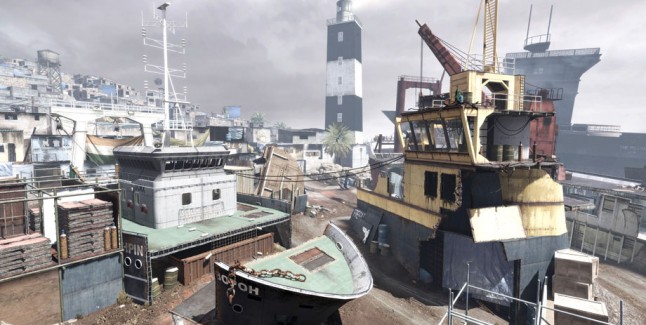 The July content drop for Call of Duty: Modern Warfare 3 DLC arrives on July 17th, 2012 (for Call of Duty: Elite premium members) on Xbox 360 as a month-long timed exclusive, after which in mid-August it’ll come to PS3 and PC.

Elite Drop 16 is the Decommission “search and destroy” multiplayer map:
A graveyard of rotting [or add decommissioned here] ocean liners has not only given birth to a shantytown of locals, but a mid-sized Multiplayer Map populated in chokepoints; providing the perfect setting for shoreline-based combat.

Elite Drop 17 is the Offshore “search and destroy” multiplayer map:
Trapped on an oil rig in the middle of the ocean, you have nowhere to go but directly at your enemies in this new Multiplayer map boasting helipads, cranes, and countless perches for snipers eager to pick off the competition. Did we mention to look down or else you may fall off?

Elite Drop 18 is the Vertigo special ops mission:
The luxurious “Oasis” hotel in Dubai hosts the latest Special Ops mission, in which players must use laser-guided RPG’s to dispatch waves of helicopters. Utilize rooftop advantage to defend from waves of enemies, before parachuting to a ground-level exfil point.

Take a basic look at the new maps in this video:

Are you looking forward to playing the new Modern Warfare 3 DLC?