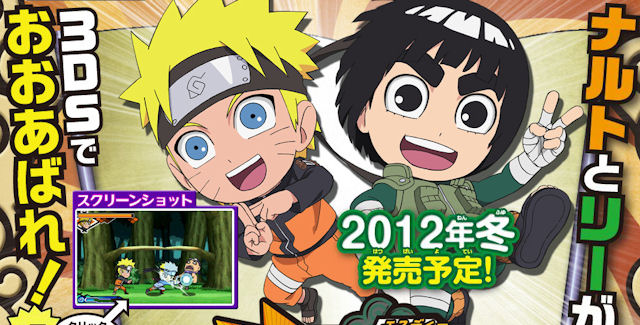 This is the second Naruto game for the 3DS handheld, the first game Naruto Shippuden 3D: The New Era got a release in Europe and Australia in June 2011. So while no English version was confirmed at this time, there’s a good chance this fighting game will make its way outside Japan.

Naruto SD: Powerful Shippuden is based on the Naruto spin-off anime Rock Lee & His Ninja Pals (this is a link to all free-to-watch-online episodes on Crunchyroll!) — Consider the show’s name, logically the SD-style playable characters confirmed so far include: Rock Lee and Naruto.

See the trailer to the end for a Chibi surprise. 😆

Is Chibi Rock Lee in a bikini your favorite feature for Naruto SD: Powerful Shippuden?