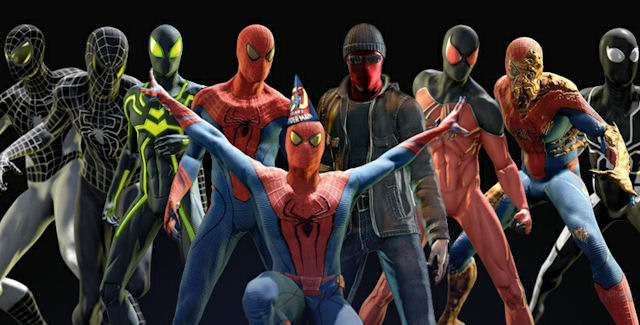 Looking for The Amazing Spider-Man 2012 Game Costumes, Codes & Cheats? The following will help you get the most out of this latest Spider-Man game on the Xbox 360, PS3, PC & Wii.

You find 5 of the 8 unlockable costumes around the city, and the last 3 for finishing the game. Including DLC that makes 11 confirmed Spider-Man costumes in total (so far).

The unlockable The Amazing Spider-Man alternate costumes total 8: The Negative Zone Suit (silver & black costume), The Black Suit (from Spider-Man 3), The Big Time Suit (neon-green costume), The Belt-less Suit (like in the 2012 movie), The Vigilante Suit (from the start of the movie), The Scarlet Spider (Kaine’s suit from the comics), The Cross-Species Spider-Man (mutated from the comics), and The Future Foundation Suit (from the comics). – There’s also The Party Hat option that works on every suit, it’s shown in the picture at the top of this page. – Aside from the default suit, there are also 2 DLC costumes, one is The Classic Suit from the movie Trilogy and the other one is Stan Lee himself!

While in some cases there are cheat codes to unlock costumes, but mostly you’ll be busy finishing the game or tracking down in-game Spider-Man symbols to unlock them. Here are the details…

How To Unlock All The Amazing Spider-Man Costumes

Complete the game or find the hidden Spider-Man logos in Manhattan to unlock new outfits.

Important steps to unlock all costumes:

STEP 1: Start you game, then remove your Live internet connection by disconnecting the Ethernet cable or Wi-Fi router from your console.
STEP 2: Before you can unlock all the costumes in the game, you’ll first need to have the camera, which is unlocked in Chapter 3: In the Shadows of Evils Past. You need the camera to take pictures of the Spider-Man logos, which unlocks a new costume.
STEP 3: When using the below listed tips and tricks to unlock all costumes, you have to be disconnected from online during the whole process or it won’t work.
STEP 4: You also have to change the date on your game system to December 2012 (anything between August-December 2012 is fine). After you’ve collected all the costumes, you can change the date back to normal.
STEP 5: Then the Spider-Man symbol will appear in the below locations. The reason for this is that the alternate costumes are already in the game, but the Spider-Man symbol only appears after their specific date, but if you speed up time by changing the date on your game system you can get the costumes early.
STEP 6: Finally, you can change costumes by going to your apartment and using the “Check Wardrobe” option.

How To Unlock The Scarlet Spider Costume

You need Peter Parker’s camera to unlock The Scarlet Spider (2012) alternative costume. The symbol you have to photograph for this costume is located in the middle of Central Park. Move north away from the fountain there. The Spider-Man symbol will be hiding right under the middle bridge and is very hard to miss.

How To Unlock The Birthday Hat For Your Costume

Originally you would have to play the game sometime in August 2012 in order to unlock this alternative costume. This video shows a nice system-clock time-changing trick to get the hat at anytime of the year.

How To Unlock The Negative Zone Costume

The map location is shown on video for the tall building it’s on. The Negative Zone Costume is on top of the Beenox building. You can find the Beenox building as the second building inwards of the Brooklyn Bridge. The developers always like to put in a building named after them and hide a secret there!

How To Unlock The Cross-Species Spider-Man Costume

To get The Cross-Species Spider-Man Costume, you must finish the game on any difficulty mode.
This Spider-Morphosis alternative suit is from the comics when Spider-Man slowly mutates into an actual huge spider.

How To Unlock The Future Foundations Costume

The map location is shown on the video for The Future Foundations Costume. It’s on back of the ground floor gas station store, which you can find in a small alley right of north bridge.

How To Unlock The Big Time Costume

The map location for The Big Time Costume is shown on map in the video. It’s in Times Square at the back of the ground floor, large red solar panel it’s on. Or maybe they are glass red bleachers? Anyway, the bright red color makes it easy to spot where to go.

Find the secret Spider-Man logo to unlock The Classic Black Costume. The map location is shown for the park pagoda building’s it’s under. Just look up when you’re under the middle of the roof, and take a picture of it.

A real treat for the millions of fans of Spider-Man 3’s EMO Peter Parker! 😛

How To Unlock The Black Costume

You can unlock The Black Costume version of the default suit for completing 100% of the game.

The Amazing Spider-Man Unlockable Costumes continue on Page 2 with DLC like a playable Stan Lee!