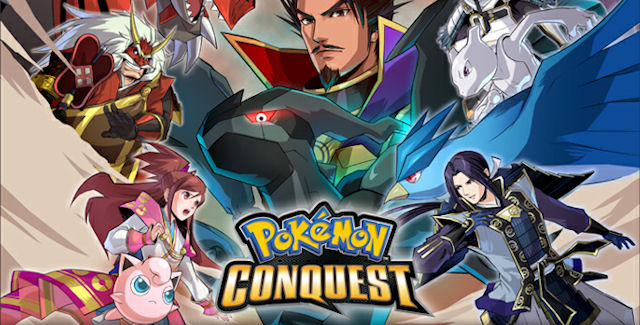 This Pokemon Conquest walkthrough will guide you through the beginning to ending moments of gameplay with strategy tips for this Adventure-RPG exclusively on the Nintendo DS and also playable on the 3DS.

It’s a new world of Pokémon battles! Become a Warlord and build your kingdom! Welcome to a world inhabited by mighty Warlords and their Pokémon—It’s a new way to experience Pokémon! Use your Pokémon—and the special ability of your Warriors—to build your kingdom! Train your Pokémon and recruit more Warriors! With nearly 200 Pokémon, mainly from the Pokémon Black Version and Pokémon White Version games, there are many options when building your army! Unite the 17 kingdoms of Ransei and awaken the Legendary Pokémon!

This game is rated E for Everyone and includes Mild Cartoon Violence, Mild Suggestive Themes.

The 17 Kingdoms of the Ransei region possess a variety of Armies competing for control. The 17 Kingdoms are also deeply linked to a specific Pokémon type. Primus Kingdom, for example, has a strong connection with Normal-type Pokémon!

How To Play Pokemon Conquest:

Step 1: Select a Kingdom to Invade!
Select a Kingdom from the map screen or the Ransei Map. Not only can you challenge other Kingdoms, they can attack you, too. If you gain control of a new Kingdom, distribute its Warriors among your controlled locales.

Step 2: Be Victorious in Battle!
Pokémon Conquest features Pokémon battles in a new format for Pokémon games. Each side participates with a maximum of 6 vs 6 Pokémon. Warriors use Warrior Powers to support their Pokémon. The winner of the battle claims the Kingdom for his or her own! Skill types and Pokémon movement ranges are key strategies.

Step 3: Prepare for the Next Battle!
When you win a battle, the Link between the Pokémon and the Warrior grows, giving you an advantage in future battles. You can also use your own Armies to partner with new Pokémon and scout for additional Warriors.

Here’s the introduction to Pokemon Conquest.

Part 3: The Kingdom of Greenleaf

Taking on The Kingdom of Greenleaf and all their grass Pokemon. The enemy are massive jerks, taking all your present money!

Fontaine with its water Pokemon! Taking that kingdom with the power of our VINES! It’s easy to defeat. Traitor fountains abound.

Violight! Starring a fight with Ms. Bossy-pants. The checkerboard of death field and then later the STUPID chingling flying over waterfalls gives us problems.