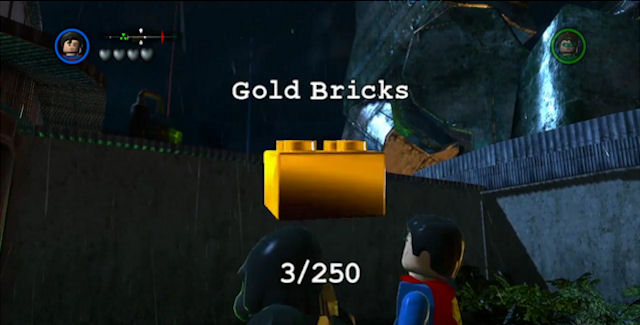 Our Lego Batman 2 Gold Bricks Locations Guide shows all the criteria necessary to collect all 250 Gold Bricks in the Xbox 360, PS3, Wii and PC game.

There are a total of 250 Gold Bricks in Lego Batman 2: DC Super Heroes. Locate ’em all!

• The 250th Gold Brick location can be found in the secret Bonus Level called Lego Gotham City AKA Toy Gotham. You need 175 Gold Bricks to build its gold door “LEGO” entrance next to the fountain in the middle of Gotham Park (Central Island), as well as have Clark Kent & The Penguin characters unlocked to enter it.

This video guide shows you how the last of the required 1 million studs are collected in that bonus level to unlocked the final and hardest to get Gold Brick. Take a look at the video here:

Goal: The Gold Bricks can be used in many different ways, from unlocking new playable character, gaining achievements / trophies, to adding more fun to the game for your inner collector by finding them all.

Humble Beginnings: You will automatically receive a Gold Brick for each level of the game’s Story Mode that you complete the others require a little more work. We’ll explain it in detail below.

Pro Tip: Gold Bricks in Lego Batman 2 are also important for another reason. Because a certain number (usually A LOT) of Gold Bricks are required to build gold doors that unlock hidden playable characters (Heroes) in the game. Specifics are mentioned in our “how to unlock characters” guide linked here…

Part 2 shows the second batch of the 69 Gold Bricks.

Part 3 shows the last group of the 69 Gold Bricks.

The final batch of the 38 Gold Bricks in South Gotham City Island.

Part 2 shows the second batch of the 38 Gold Bricks.

Part 3 shows the last group of the 38 Gold Bricks here.

Since we wouldn’t know where to begin showing you 250 Gold Bricks individually on video, the above video guides group them together per island. Next we’ll highlight some of the more difficult to find Gold Bricks in the game. With the majority of the Gold Bricks located in the Gotham City open world, let’s focus on those first.

• Here’s a video showing one of the many ways to grab Gold Bricks in Gotham City. Before you start Level 3: Arkham Asylum Antics, at the fun park’s parking lot there are traffic cones everywhere, run them over with your vehicle to get a secret Gold Brick!

• You can attain MANY gold bricks by going to the Amusement mile area, playing the games and riding the rides on the midway to conclusion. For example the shark roller coaster ride and tea cups, each of these will get you a gold brick. If you have already got a gold brick there, no problem, like other LEGO games you’ll earn a purple stud!

Thanks for tips to tjritter79 and for the gold brick location videos to HappyThumbsGaming.

Please check our at the top listed Lego Batman 2 guides for tips to find 100% of the collectibles.
If you have any questions or tips about Gold Bricks, please comment below and we’ll give you credit for your finds! Thanks for visiting!