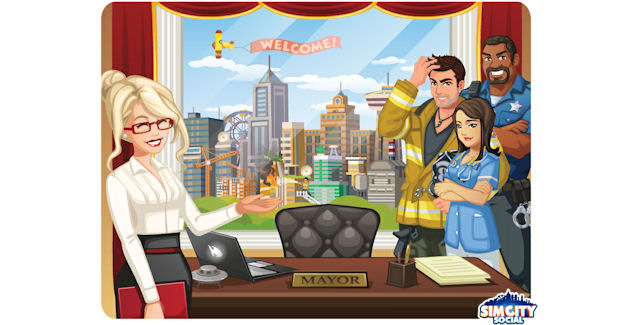 Electronic Arts has announced that SimCity, the world-renowned city-building simulator from Maxis that pioneered the genre, is coming to the largest social network in the world, Facebook. A close collaboration between many talented people at Maxis and Playfish, the game is called SimCity Social and will bring the REAL city-building simulation to the masses, giving players the freedom to create sprawling cities that come to life as a result of player-driven choice. SimCity Social is currently closed beta and will be launching globally on Facebook soon, “Like” the official Facebook page to get in-game items at launch.

In SimCity Social, there are no set linear paths to follow; cities evolve as a direct result of player-driven choice allowing for more creative freedom. As mayor, players will deal with unforeseen issues like fires, crime and pollution, and will make crucial decisions that will help them discover how their cities take shape. Social interactions in SimCity Social go far beyond just visiting friends’ cities or using them as resources to complete tasks. Players can choose to build friendly relationships with other cities or form an intense rivalry through a dynamic and ever-evolving friend and foe system. With multiple options for city growth, unexpected gameplay events that shape the destiny of the city, and city-to-city relationships, players will see recognizable changes that bring forth aesthetic and gameplay alterations based on the decisions made in the game – for better or for worse.

“Facebook gamers have been waiting a long time for the original and best city-building game to come to the platform,” said Jami Laes, Vice President of Global Studios for Playfish. “This isn’t your typical drag and drop city-building game. Players don’t just build a city – they choose the kind of city they want and watch its soul come to life as it grows and reacts to their decisions. With SimCity Social, we’ve taken the best in social gaming design and married it with unprecedented depth to create an all-new deeply social experience.”

“Over the years EA has continued to bring major brands such as The Sims to Facebook,” said Sean Ryan, Director of Games Partnerships, Facebook. “SimCity Social is a great addition, and we look forward to another high quality game becoming available to the hundreds of millions of people who play games on Facebook each month.”

Will you be checking out the upcoming SimCity Social on Facebook?