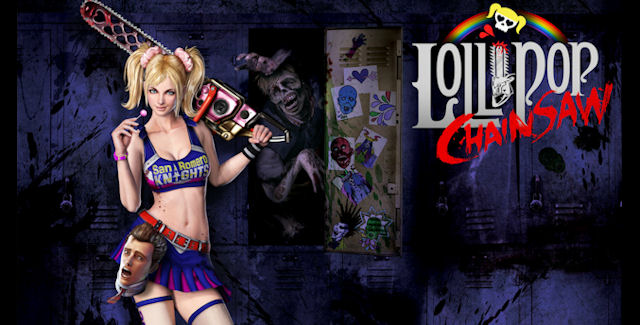 This Lollipop Chainsaw walkthrough will guide you through the beginning to ending moments of gameplay with strategy tips for this hack ‘n slash action game on the Xbox 360 & PS3.

Lollipop Chainsaw is a single player game in which players battle zombies as never before – in the form of the spirited and sexy, chainsaw-wielding cheerleader heroine, Juliet Starling. The game contains an addictive mixture of mature zombie apocalypse gameplay, juxtaposed with the bubbly actions and attitude of the perky teen heroine. Additional features include, upgradable cheerleading abilities and chain saws that both serve in combat, over-the-top zombie rock lord bosses, a storyline full of hooks, and a rockin’ soundtrack.

Please note that viewers must be at least 18 to watch, so no harm comes to those with innocent eyes. This game includes Blood and Gore, Drug Reference, Intense Violence, Partial Nudity, Sexual Themes, Strong Language.

The Lollipop Chainsaw walkthrough will be played on Hard difficulty mode, which has special zombies that aren’t on Normal or Easy.

Lollipop Chainsaw is the UN-deadly story of sweet and killer zombie-hunter Juliet Starling and her quest to uncover the root of a colossal zombie outbreak. With her wickedly awesome chainsaw in hand, Juliet slices, dices and splits her way through hordes of the undead, but soon realizes the horde is only the opening act to a festival of zombie rock lords determined to kill the chainsaw-wielding cheerleader.

Lollipop Chainsaw is being developed by Grasshoper Manufacture, led by celebrated game developer Goichi Suda (AKA SUDA 51) and featuring the musical compositions of the renowned Akira Yamaoka. In addition, Hollywood director and writer James Gunn (Super, Slither, Dawn of the Dead, Tromeo and Juliet) has brought his cult humor and edgy storytelling to Lollipop Chainsaw’s script.

Lollipop Chainsaw is a Hack and Slash Action game. To combat and kill zombie enemies, players utilize a combination of available attacks. Light attacks, in the form of punches kicks, and the like can be used in taking on small numbers of enemies, or to maneuver enemies into the most convenient position when faced with a numerical disadvantage. Stonger attacks against single or multiple enemies are unleashed using Juliet’s devastating chainsaw. Even stronger advanced attacks are possible by filling up Juliet’s star meter. The decapitated, but quite alive severed head of Juilet’s boyfriend Nick can be used in attacks as well, and success in attacks allows for the upgrade of Juliet’s chainsaw.

Here’s the introduction to Lollipop Chainsaw.

Part 2 of the Prologue.