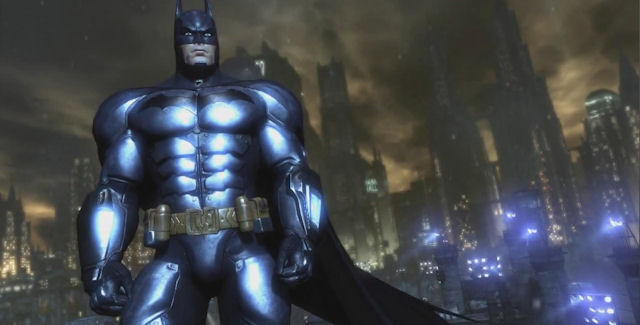 Warner Bros. Interactive Entertainment has announced Batman: Arkham City – Armored Edition as a Nintendo Wii U-exclusive launch game. Originally on Xbox 360, PlayStation 3 and PC, the action-adventure games will soon make its way to Wii U with added Wii U GamePad control options to show a map and motion-controlled Batarang throwing. As well as a little extra content like the armored suits for Batman & Catwoman, and there’s a new BAT mode that collects kinetic energy in his suit to expand all at once in a super attack.

Developed by WB Games Montreal, Batman: Arkham City Armored Edition is the enhanced version of the award-winning blockbuster videogame created by Rocksteady Studios. The Wii U version delivers the same impactful story and gameplay as the original title, this time with enhanced gameplay mechanics and features made possible with the Wii U and the new controller.

Batman: Arkham City is based on DC Comics’ core Batman license and is set in Arkham City, the new maximum security “home” for all of Gotham City’s thugs, gangsters and insane criminal masterminds. Featuring an incredible Rogues Gallery of Gotham City’s most dangerous criminals including Catwoman, The Joker, The Riddler, Two-Face, Harley Quinn, The Penguin, Mr. Freeze and many others, the game allows players to genuinely experience what it feels like to be The Dark Knight delivering justice on the streets of Gotham City.

• Battle Armored Tech Mode (B.A.T. Mode) – A new upgraded battle suit for both Batman and Catwoman gives players an additional power-up by allowing them to build up kinetic energy during combat. When activated, Batman enters B.A.T. mode, whereby he doles out more damage and has a heighted sense of enemy locations.

• Wii U New Controller Functionality – The new controller’s touch screen allows players to truly be The World’s Greatest Detective with the newly designed, wrist-mounted Batcomputer. Players can select their gadget, track evidence, upgrade their gear, set and detonate bombs, and more, all without ever leaving the game.

• Reimagined Gadgets – All gadgets have been reimagined to utilize the power of the new controller. For example, players can now use the new Sonar mode that enables Batman to quickly probe his surroundings to develop the tactics needed for success. Players can then select, customize and equip their preferred gadget loadout, as well as access a real-time map of Gotham without ever leaving the action of the game. The new controller also allows for an unprecedented level of accuracy when using the Batarang and scanning for clues.

If you haven’t already played it elsewhere, would you consider buying Batman: Arkham City – Armored Edition on Wii U?