New Super Mario Bros. U Announced for Wii U 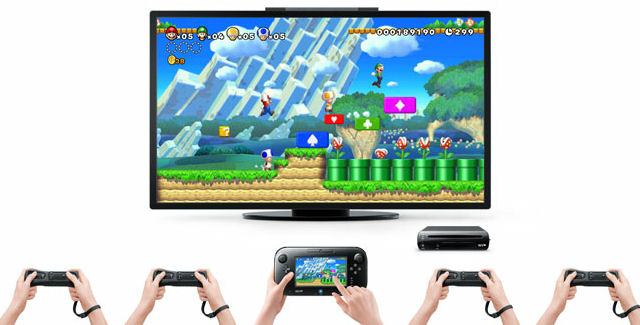 New Super Mario Bros. U is a new side-scrolling adventure in the Mushroom Kingdom that introduces new transformation suits for Mario and the ability for players to play as their Mii characters (alongside Mario, Luigi, and Toads). The game also introduces the new Boost Mode, which can be used to add blocks using the Wii U GamePad’s touch screen, to help players avoid enemies, enable Mario to discover secrets or allow multiple players working together to perform a level speed run in record time. All while up to 4 players are using regular Wii controllers to play on Wii U.

Of course as we all know, mischievous “friends” will be able to misuse this feature as well to hinder fellow players and cause more chaos. This can be done, for example, by placing these (up to 4 colorful platforms at a time) above the friend’s character as he/she jumps over a ravine to make them fall to their deaths! *insert evil laughter*

The Key Features of New Super Mario Bros. U Are:

• Swoop through levels and cling to walls when Mario transforms into Flying Squirrel Mario, or gently float through the air while hanging onto Tiny Balloon Yoshi.

• The Wii U GamePad controller offers a new way to play multiplayer in this game. An extra player can jump into the action using the new Boost mode, creating platforms out of thin air to help others navigate tricky stages or access hidden or hard-to-reach items.

• Boost mode also makes cooperative speed runs possible for the first time. Use the GamePad to interact with and manipulate enemies and objects in real time, allowing for new ways to find the fastest routes through each level.

• Play on the big screen or the small screen. Switch game play from the TV to the GamePad at any time to continue playing even when others are using the TV.

• Experience Mario together like never before with Miiverse. See other players’ comments and accomplishments while you play and leave your own feedback for others to see when connected to the Nintendo Network.

Super Mario Bros. was the first game I ever played on the Nintendo console I got for my 8th birthday, so I think I’ll always be excited for the next fun Mario game. Out of all the Nintendo titles shown at E3 2012, this is my favorite one. How about you?

Are you looking forward to the 2D New Super Mario Bros. U?