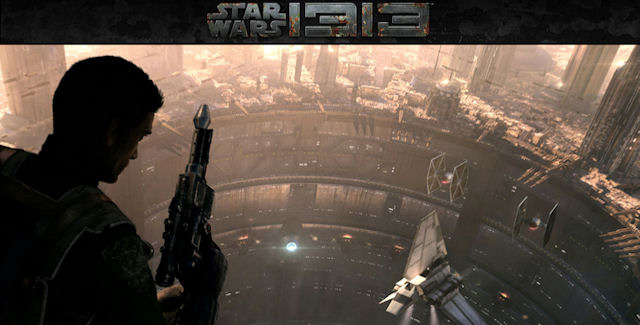 LucasArts has announced Star Wars 1313! The 3rd person shooter won’t star Jedi’s, instead delving into the Bounty Hunter underworld. As such it’ll take place underground on Level 1313 of planet Coruscant. No platforms were announced yet.

Named for Level 1313, a ruthless criminal underground deep below the surface of the planet of Coruscant, the game puts players in control of a deadly bounty hunter as he uses an arsenal of exotic weaponry to hunt down his marks and uncover the truth surrounding a criminal conspiracy. Star Wars 1313 emphasizes epic set pieces and fast-paced combat with a hero who uses human skills and gadgets, rather than supernatural Force powers, to make his way through this dangerous world.

The bar is raised as Star Wars 1313 pushes technology to new beautiful limits.

Forgive me for saying this, but the gameplay looks very Uncharted inspired.

Gorgeous, action-packed gameplay from the new installment of the historic franchise, Star Wars 1313.

I hope Boba Fett will be playable, character awesomeness aside, not in the least because a jetpack looks like it’ll come in handy!

Do you like the new direction LucasArts takes with Star Wars 1313?