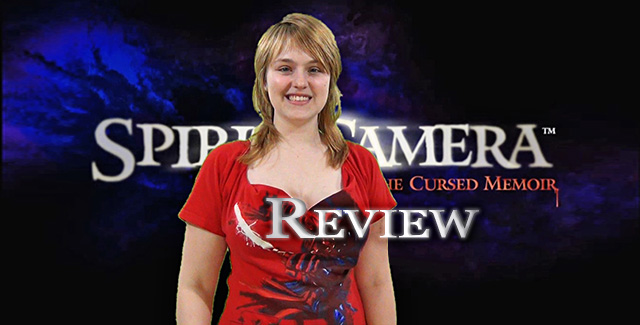 Thanks for stopping by for my review of Spirit Camera: The Cursed Memoir. In this video review I will discuss my impression of the story, gameplay, aesthetics, and audio of Spirit Camera. I will also reveal what I consider to be the best and worst aspects of the game. Finally, I will give my recommendation of who I think would enjoy this game.

I freely admit that I am a big scaredy-cat. I don’t watch horror movies and I definitely never, ever, never play horror video games. Horror games, more than anything else, scare the living daylights out of me. But, that didn’t stop me from enjoying Spirit Camera the cursed memoir. The story of the game starts before you ever even turn on the 3DS. When the game box is first opened the player will first see the diary of faces. It looks like the school Journal of a gothic art student or maybe just the art book of a mentally disturbed toddler who is extremely messy and has copious amounts of ink to play with. Either way it’s creepy as hell. When the game actually starts we find out that this journal isn’t just dirty, it’s cursed, and your 3DS is no longer a gaming console, it’s a magical camera. With this camera I’m able to see dead people and not the Casper the friendly ghost type. Well, there is one friendly ghost, Maya, but she’s still creepy and strangely overly elusive, whenever she wants to talk to you… you have to look for her. She helps fill in some of the mysterious details about the journal and was pretty helpful in tracking down the malevolent spirits, who I can kill with my magical camera.

The game is played almost entirely using the built-in camera functions and augmented reality features of the Nintendo 3DS. In order to play Spirit Camera the area being played in needs to be very well lit, above and beyond just a lamp on or a window open. There needs to be lots of light in order for the game to function right. That actually worked out in my favor because I kept looking away from the game because I was getting scared. Having the bright lights on didn’t let me get sucked into deep to the horror. When I first started playing any controls felt a bit awkward but I think that’s because I have not played very many augmented reality games once I got the hang of it it was pretty intuitive I realized. The augmented reality actually works fairly well, I was impressed, and the game was immersive enough to scare me pretty good at some points but I admit I am easily scared.

Spirit Camera pulls a player between two worlds: the real world using the augmented reality camera, and a mysterious old house where the spirits are trapped by a mysterious evil woman who wears black. Although honestly I don’t know that I’ve ever seen an evil person wearing pastels but all the spirits called her “The Woman in Black”. The creepy haunted house contrasts even more from the real world because of how bright it needs to be for the augmented reality to work. Inside the house is very dark, gritty, and dirty and basically terrifying to anyone who’s easily scared like I am, or a germaphobe. Most of the animation in the game was good but I was especially impressed by a ghost hand that comes out of the journal and attacks. That part was especially realistic to me and very scary.

The audio effects in this game are spot on. All of the creepy wind blowing and leaves rustling and every other creepy Halloween horror movie type sound effect that you can think of. Those effects, coupled with the ominous music, took the creepy atmosphere of the game and increased it tenfold. The voice acting on the other hand was somewhat mediocre a little flat. Maya has the biggest speaking part and unfortunately her voice acting sounded less than authentic. Even assuming that a ghost would speak in a monotone voice, she wasn’t devoid of emotion. It was more like she was incapable of expressing emotion properly.

My favorite aspect of the game is the story and the adventure that the game presents in a world that immerses not only the player but the player’s environments into the game. I could definitely feel myself being sucked into the world and I really wanted to discover more about the mysterious evil lady and solve the mystery.

The worst aspect of this game is Maya. I know it probably sounds harsh but I was much more interested in solving the mystery then in saving her eternal soul. I just couldn’t see her value or understand why she was in the game she presented no motivation for me and having to look around for her all the time got pretty annoying.

The story mode was plenty for me but in addition there are other modes that use the 3DS camera. If the player wanted if they could use the other modes such a spirit photography and spirit check to make up their own creepy little stories I think that be kind of fun thing to do for younger players who want to integrate the game into their own imagination play. In spirit photography the camera can be used to take pictures and watch as creepy stuff shows up in the pictures. In the spirit check pictures can be taken of the player or people around the player to see what evil spirits are lingering around them.

I haven’t had much experience with augmented reality games but this game prove to me that there is a lot of opportunity to make some very unique games with this technology. Not only is this an augmented reality game it’s also akin to the alternate reality games which use the real world to tell a fictional story. By using the real world the game gets the player much more emotionally involved into the story. The feature where this is most striking I think is in the spirit challenge which lets the player face a spirit with their own phase where their friends face. at first I thought this would be funny but after using my friends face to face the spirit I actually felt sad after I defeated it. I was disturbed at the thought of facing my friends evil spirit it was unnerving. Experiencing that kind of reaction really says a lot about how Spirit Camera pulls the player into the game.

I recommend this game to anyone who likes horror games, alternate or augmented reality games. Even though some aspects of the game are corny and the voice acting isn’t all that great, the game provides an interesting and dynamic experience. Personally I’m glad I own it I think it’s a great to play if I am especially in the mood for a mystery. I don’t recommend this game to very small children who are easily scared but I am a very easily scared person and I was able to play this game. For a person who loves to be scared and lives for horror this game might not be scary enough for you and the bright lights that are needed to play the augmented reality might kill the effect for you. For me it serves as a contrast between the world within the game and the alternate reality world that is the player’s actual environment so it might just be a matter of perspective.

Do you plan to pick up Spirit Camera? If you already own Spirit Camera, let me know your impression of it down in the comments below.