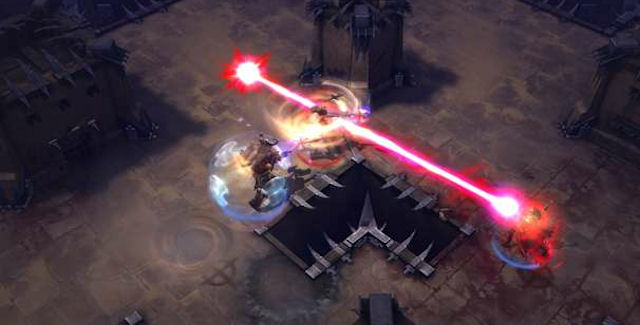 Diablo 3 Player VS Player* will be added to the PC & Mac game with the upcoming patch 1.1 after the May launch. This was confirmed with this week’s Diablo 3 patch 1.02.

We’re going full steam ahead on the PvP patch, which will also include a number of game changes unrelated to PvP, and we look forward to sharing more about that as we get closer to opening up a PTR, where you’ll be able to test out our changes — and enjoy mercilessly slaughtering one another in the PvP Arena.”

The original PvP delay explained that: “We’ve come to realize that the PvP game and systems aren’t yet living up to our standards. Today, we wanted to let you know that we’ve made the difficult decision to hold back the PvP Arena system and release it in a patch following the game’s launch.

When the PvP patch is ultimately ready, it will add multiple Arena maps with themed locations and layouts, PvP-centric achievements, and a matchmaking system that will help you and your team get into fairly matched games quickly and easily. We’ll also be adding a personal progression system that will reward you for successfully bashing in the other team’s skulls.

We know a lot of you are looking forward to PvP, and we’ll be focusing our post-launch efforts on making sure the Arenas are as brutal, bloody, fast-paced, and awesome as we know they can be.”

Here’s a video from Blizzcon showing the Player VS Player in Diablo 3:

The PvP Arena is where you can battle other players without consequences. That means if you die your corpse won’t get looted nor lose a level, as there’s no loot to be found. During last year’s Blizzcon, one of the developers Jason Bender was interviewed by G4TV about PvP Arena and mentioned it might support leaderboards and other player rankings. At the time at least, it seemed that the only real consequence of PvP Arena is in its Hardcore difficulty mode, where if you die, your character gets erased forever! 😮

Considering Diablo 2 patch 1.03 follows next week, I’d imagine patch 1.1 with PvP is only a few weeks to two months away.

* Player VS Player is often shortened to PvP and pronounced as Player versus Player.

Are you looking forward to Diablo 3 Player VS Player?