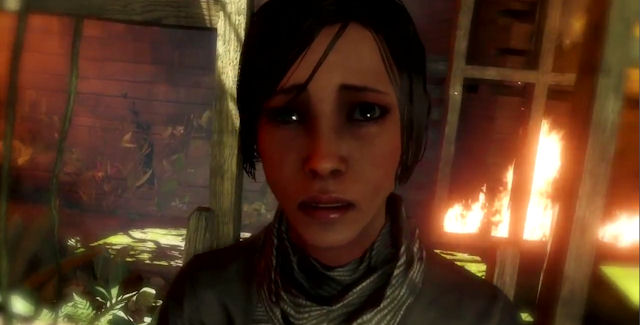 Ubisoft has released a new Far Cry 3 gameplay trailer showing Jason trying to save Lisa from a burning building Uncharted-style! 😀

Here’s a reminder of Far Cry 3’s synopsis of some tourists getting trapped on a holiday island:
“Beyond the limits of civilization lies an island, a lawless place ruled by piracy and human misery, where your only escapes are drugs or the muzzle of a gun. This is where you find yourself, trapped in a place that’s forgotten right from wrong, a place that lives by the principles of violence. Discover the island’s bloody secrets and take the fight to the enemy; improvise and use your environment to survive. Beware the beauty and mystery of this unexplored paradise and live to outwit its roster of ruthless, desperate characters. You’ll need more than luck to survive.”

In this new gameplay trailer I especially like how Jason makes some astute observations while walking deeper into the burning house they’re trapped in, such as “There’s fire everywhere!” Sherlock Holmes would be proud. 😛

For a variety of different gameplay footage from around the island, check out this other gameplay trailer.

Here’s a reminder of the unstable inhabitants of this tropical island that you’ll meet, especially their leader Vaas.

Are you going CRAZY for Far Cry 3 yet? Not nuts like Vaas I hope!