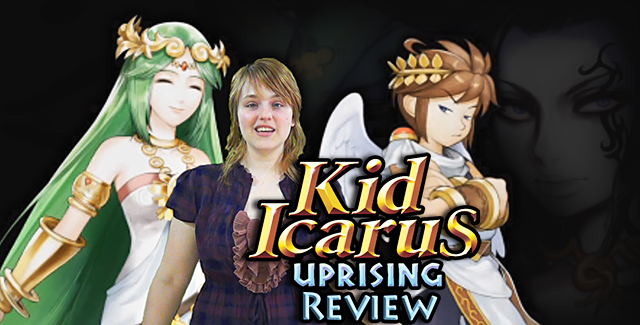 While playing Kid Icarus: Uprising I became increasingly curious about the first game. I think that sums up what I think of the game, so good it made me want to play a predecessor made before I was born. This is a series I’ve previously dismissed and I now realize that was a mistake.

The first Kid Icarus game came out nearly my entire lifetime ago but it is still remembered as one of the great classics of the original Nintendo system. The story starts us out with the adorably clueless but heroically brave angel, Pit. Alone, he’s practically hopeless; luckily he is friends with the goddess of light and guardian of the human race, Palutena. She gives him wings and he helps her protect the human race. It’s one of those symbiotic relationships. Palutena handles all the behind-the-scenes stuff. She tells Pit where to go and gives him information on the enemies. Even though Palutena is a perfectly nice goddess everybody has enemies. Her big baddie is the dark Goddess Medusa and her underworld army. Even though she is the guardian of the human race she needs an angel to go down to earth for her and deliver the swift hand of justice. Pit doesn’t even have to use his hands; he has plenty of weapon choices: blade, staff, claws, bow, cannon, orbiters, arm, and palm.

When I settled in to play Kid Icarus: Uprising for the first time I had just fluffed up the unnecessarily high amounts of pillows on my bed and settled in. I was so comfortable I planned to play all night until I fell asleep. I probably wouldn’t have slept at all that night if I had remembered to bring the stand that came with the game into bed with me. Unfortunately, I didn’t think I would need a stand. That assumption was totally wrong. With my right hand I had to use the stylus on the touchscreen for targeting and then I had to hold the 3DS in my left hand and squeeze the left bumper with my index finger and use the circle pad with my thumb. Trying to play the game and hold 3DS at the same time is awkward and it almost impossible to play with the 3D enabled because I couldn’t hold the top screen straight and work the bottom screen at the same time. It’s okay though, because even with all the awkward handling I still couldn’t stop playing the game to get up and go get the stand, or that may be pure laziness. Once I did get the stand to play Kid Icarus it totally solved the problem as long as I played on a flat surface. Any time I was lounging I did end up turning off the 3D function.

Once the awkward handling of the 3DS console was solved, the actual game is extremely fun to play. Each chapter of the game is broken up into two sections, air battle and land battle. I have to admit that air battle was my favorite part of the game: an action-packed rail shooter. Admittedly, that is one of my favorite genres, to be fair. Landed battle isn’t too shabby either. On the ground, Pit is in thick of it and the gameplay handles more like a third person shooter. Both types of gameplay are extremely enjoyable and offer the player a lot of action.

The style of the game is typical of Nintendo games, colorful and simple with broad appeal. When I was using the stand, I could turn on the 3D and it looks really good, especially in the cut scenes. Many of the in-game visuals during the air battles were especially impressive. Flying over cliffs and down into valleys, it made the game seem like it was on a very grand scale. I especially like that each of the weapon categories had their own distinct animation during the battles, which greatly added to the variety of the gameplay.

The voice acting was very natural and believable and I instantly liked all the characters introduced. I was a player who had not previously played the original Kid Icarus for NES; I didn’t have nostalgia to connect me with characters. The personalities of the characters shined through the voice acting. Continuing on the same note, the music in Kid Icarus: Uprising sets the tone for each level of the chapters. When flying through the air, the music is uplifting with a quick light tempo. While on the ground, perpetually heading towards more enemies and mortal danger, the music is fast and has an even tempo, increasing the feeling of anticipation toward the impending boss battle of the chapter.

I have always loved shooters on rails which is probably why I am such a fan of the air battles in Kid Icarus. I felt like I was right there, behind Pit, flying along shooting down enemies. It captured the exhilarating freedom of actually flying through the air. Almost as awesome is the wide variety of collectible weapons available in the game.

The worst aspect of this game is the awkward handling of the 3DS console. This issue is easily overcome with the stand that comes included for free with the game, but it is a little unfortunate that I can’t sit back and relax while playing Kid Icarus because I want to play a lot.

In the U.S. the retail price of Kid Icarus is about 40 dollars. At that bargain price, there is still plenty of replay value in this game. There are nine different categories of weapons ranging from bows to claws and in each category has at least a dozen weapons to collect or create. On top of everything to see and do in Kid Icarus: Uprising, the game also has a number of augmented reality cards which can unlock content.

I think the integration of augmented reality cards are a fun, creative aspect of the game. I think if they have gone ahead and made a full-fledged card game that went along with the video game that would’ve taken it to the next level and been a great opportunity for cross promotion.

I recommend this game to everyone! I think it’s amazing, it’s awesome, it’s nearly flawless. In “technical terms”, it’s extremely fun. Fans of the old game will get to see their beloved franchise re-created and a new, fresh way. As long as you play the game with the stand I think it’s impossible not to like it. The gameplay is fantastic, the world itself is fun and colorful, and the game leads the player on an exciting adventure. I especially recommend this game to parents of young children. Kid Icarus: Uprising will especially appeal to kids because Pit is such an endearing character who despite being naïve still wants to do the right thing.