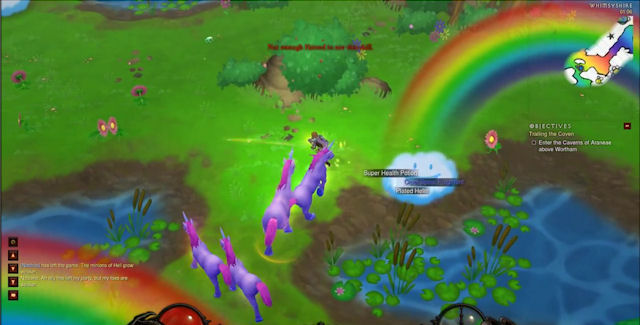 Here’s how to find the Ghost of the Cow King and unlock the Diablo 3 Secret Pony Level. This is an in-game joke from the developers similar to the Secret Cow Level in Diablo 2. In Diablo 3 there’s ponies and teddybears in the secret level, that’s actually named “Whimsyshire”.

How to unlock the secret pony level in Diablo 3? It requires you to take the following steps…

Let’s go in-depth into the Diablo 3 campaign and find out how to access the hilarious Pony Level. We’ll give you detailed voice-over instructions each step of the way, in the videos in this guide, until you know everything to unlock & play it.

How To Find & Create All the Staff of Herding Items

STEP 1: This video walkthrough shows you exactly how to find and create ALL of the Staff of Herding, as well as how to unlock the secret pony level in Diablo 3.

First craft the Staff of Herding. Here’s a list of items you need to obtain:

Craft the Staff of Herding: Then you just need to get the recipe drop, pay your blacksmith 60,000 gold and craft it! (on Normal difficulty mode).

Note: All these items (besides Wirt’s Bell) are rare or random spawn or even both. So, you may have to do multiple run throughs.
To enable it on higher difficulties you need to find the recipe on that level and pay the blacksmith again. In total you need:
Normal – 150,000 gold.
Nightmare – 200,000 gold.
Hell – 500,000 gold.
Inferno – 1 million gold.

Continue to Page 2 of this guide to find out how to unlock the Secret Pony Level.