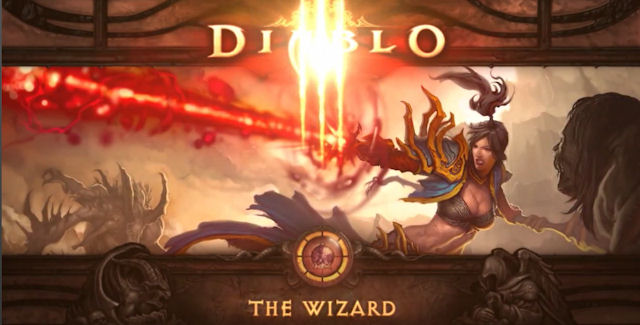 Blizzard has released guides explaining the five Diablo 3 classes. Check them out to choose your class wisely!

The witch doctors (new Sorceress, Druid & Necromancer class).
Sage conjurers, enchanters, and mystical warriors who are driven by a charge to maintain spiritual balance and harmony in the violent world of Sanctuary. They command ancient magics rooted in the primal powers of life and death, and are adept at summoning fearsome, shadowy creatures. A witch doctor is armed with simple talismans, fetishes, rough carvings… and endless ravening throngs of vengeful spirits set to bring destruction at their master’s command.

The demon hunters (new Amazon & Assassin class).
Vengeful harbingers of righteous doom who bring swift judgment and death to the hellish creatures daring enough to trespass on the mortal lands of Sanctuary. Skilled archers, assassins, and trackers, demon hunters are perfectly honed instruments set to scour demons from the world. The fact that every last one of them has a deep and personal motivation to do so only sharpens their deadly purpose.

The barbarians (brute-force class).
Mighty warriors whose strength and ferocity are a match for any foe, whether slavering beast or foul demon. Tall, broad, and rippling with muscle, the barbarian can bear a heavy weapon too large for a commoner to lift, or wield two full-sized armaments—one in each hand—with wickedly lethal purpose. In the wild and monstrous lands of Sanctuary, there is nothing more frightening than a barbarian with a dry blade.

The wizards (magic Sorceress class).
Brilliant practitioners of the arcane arts who deftly wield the energies of fire, ice, lightning, and even time itself in the pursuit of their enigmatic goals. Bedecked in archaic charms, clad in runes, and wrapped in free-flowing robes to allow for the somatic components of their spells, wizards are a veritable thunderstorm of lethal powers who can strike from close or long range. There is no safe way to approach an angry wizard.

The monks (melee Assassin & Paladin class).
Holy warriors who believe that the madness and chaos of Sanctuary are destined to be brought into order, and that it is their sacred mission to assist their thousand and one gods in doing so. Arrayed in the fiery colors of Ytar, the fire god, monks draw from their years of intense training and meditation to become masters of melee combat. While proficient with many types of weapons‚ staves, blades, maces and spears, monks have no real need for such crude tools. Their discipline has honed both body and mind into living instruments of divine justice.

Which of the Diablo 3 Classes will you play as?