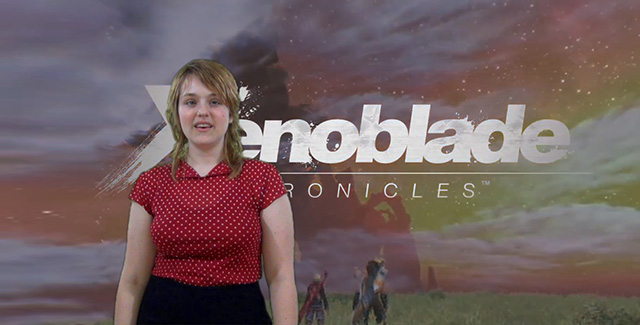 Xenoblade Chronicles tested my ability to set aside my personal preferences and play this game objectively. I won’t lie and say that this game lived up to my admittedly high expectations. It did, however, surprise me by giving me some new experiences and opened my eyes to the potential in blending different game genres.

Anyone who’s played a Xeno game knows how the story is going to play out. In long and frequent cut-scenes. That’s just how it goes, from there it’s up to personal preference. *Personally*, I’m a fan of cut-scenes when the graphics are stunning, the animation is smooth and the voice acting is perfect. Unfortunately, that was not really the case with Xenoblade Chronicles even though it presents a solid Human verses Machines plot. Two enormous gods fought an epic battle that ended both their lives. And now their giant carcasses serve as the homeland of two civilizations, biological and mechanical. One pleasant summer afternoon, the machines *randomly* decide to attack the humanoids, for *mysterious* reasons. But *this* story begins a year later with Shulk, an unsuspecting young hero who becomes the wielder of a powerful and mysterious weapon.

I love customization and Xenoblade Chronicles delivers when it comes to options for weapons and five different pieces of armor. Not only does customization affect characters stats it goes a step further and changes a character’s whole ensemble. It’s good to be stylish when Shulk is such a social butterfly. Yep, this game has an Alliance Meter. It’s simple but can have an effect of various aspects of gameplay. For example, the more side quests you complete in each area, the locals will trust you more. The higher the trust, the better items you can get when trading with the NPCs. Then, to continue the cycle, even more side-quests are unlocked along with skill trees for each character.

Xenoblade Chronicles marries together the JRPG and MMO genres, the latter being most apparent in battle and quests. I was hoping for a more traditional turn-based battle system but I didn’t dislike what I got. More importantly, remembering to use the camera system properly rather than fight against it took away from some of the fun of the battles. I don’t know why, but I never became used to the camera controls, especially during battle. Questing, on the other hand, was a pleasant surprise and there are a plethora of quests for an adventurer to have their fill of. Many of the quests were made up of the same formula of go to this place, kill or find this thing. However, the world is vast and begging to be explored and I spent quite a bit of time swimming down rivers and hiking along rural paths. After a while it starts to become apparent that self exploration isn’t often rewarded in the game. Corridors lead to nothing, alleyways are filled with empty crates that can’t be jumped on. I know, I tried. Plenty of loot is always out in the open, glowing, waiting for the player to just walk by.

The world of Xenoblade Chronicles is massive and full of caves, swamps, and oceans. The design of the world is really impressive and detailed. This game would look stunning, on the Nintendo 3DS. On my big screen, it was a little hard to look at. I think the developers fought against the limitations of the Wii and lost. I do contend the game was originally made two years ago but even compared to its peers, it still falls short in the looks department.

The music is actually wonderful and it’s been a long time since I’ve enjoyed a game’s music this much. I’ve even left the title screen on for a while just to listen, I can’t even remember the last time I did that. In each different area a new song would set the tone for my adventures. I enjoyed the music the most when the characters were silent but they weren’t quiet nearly enough. Especially during battle when each character has their little timeline of things to say before, during, and after every fight. This is especially annoying when grinding on low level enemies. I don’t know what made the characters seem more lifeless, the choppy puppet-like animation or the boring monotone voice acting.

For me, what makes this game fun is how each aspect of gameplay affects the others. Building character relationships, making better trades, improving weapons, and upgrading skills are all tied together. Because of this and a nearly endless amount of quests, the game has a lot for the player to do and see.

I don’t have any immediate plans to replay Xenoblade Chronicles since the game world is so vast and has more quests than I could possibly count. There’s so much to do and so much to see, you definitely get your money’s worth in the first play-through.

The best thing about Xenoblade Chronicles is the soundtrack, hands down. I don’t think video game music is recognized enough but I hope the right people stop and listen to this game.

The absolutely worst thing about this game is the quality of the graphics, I found it hard to look at my TV screen sometimes. Literally, sometimes my eyes could not focus and I had to look away for a while.

If you are a fan of MMO’s and JRPG’s, I think Xenoblade Chronicles marries the two genres together quite nicely. Someone who is curious about one of those genres and likes the other I recommend this game as a way to test the waters. Anyone who doesn’t like a lot of chore-like quests or building relationships with other characters might not like this game. I think it’s definitely worth a rent, and personally I’m glad I own it because it is a long game full of quality gameplay hours.