Company of Heroes 2 Announced By Relic 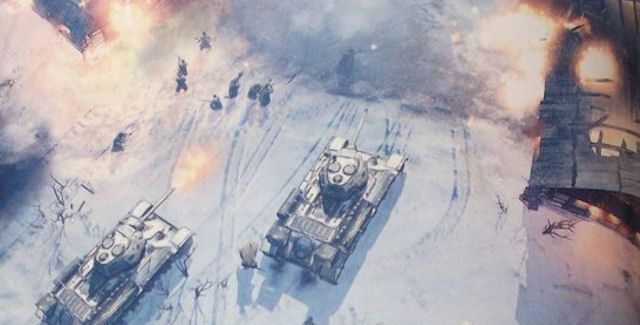 The newest issue of PC Gamer Magazine has revealed Company of Heroes 2. It announced that Relic Entertainment will be developing the Real-Time Strategy game that’s due for 2013.

While the first Company of Heroes game from 2006 followed the Allied Forces from the Normandy beach landing through to the capture of Berlin. The sequel’s story starts with the Soviets on the back foot after 600,000 soldiers, 3,000 tanks, 7,000 cannons, and 3,000 airplanes have poured into the Soviet Union. Within months, almost half of the Soviet Union’s 190 million population is behind enemy lines.

These battle missions will include:

While no platforms were confirmed, like the original, Company of Heroes 2 is definitely going to be released on PC.

May 7 update with official confirmation:

“THQ today announced that a sequel to its critically acclaimed strategy game Company of Heroes is scheduled to be taking gamers to the frozen frontlines of war in Russia in early 2013.

As a true sequel, this game moves the battle away from the common Western Front focus of World War II and refocuses on some of history’s most brutal and devastating conflicts on the Eastern Front, challenging players to take command of the iconic Red Army and repel the Nazi invaders from the very gates of Moscow.

Greg Wilson, Producer at Relic Entertainment commented, “Company of Heroes 2 is a true successor, introducing a new front, new protagonists and new technology while retaining the unique mix of strategic gameplay and competitive multiplayer that made the original Company of Heroes such a success.”

Danny Bilson, Executive Vice President of Core Games commented, “We are excited to announce a sequel to one of THQ’s best loved properties. Company of Heroes 2 will deliver an amazing strategy experience along with a strong post-launch digital content plan that enhances and expands the product’s lifecycle.”

The original Company of Heroes was released in 2006 to critical acclaim and is currently the highest rated strategy title on Gamerankings.com (with more than five reviews) with an average of 93.82% based on 56 reviews. The game features similar acclaim on Metacritic.com with a Metascore of 93% based on 55 reviews.

Company of Heroes 2 is scheduled to be available for PC in early 2013. For more information check www.companyofheroes.com.”

About Company of Heroes 2:

“It is 1941 and the beginning of what will become the most brutal conflict of World War II, as Germany launches a full-scale invasion of the frozen tundra of the Soviet Union which would result in over 14 million military casualties. Take command of the iconic Soviet Red Army in brutal frontline warfare to free Mother Russia from the invading Nazis. Your strategic skills and tactical expertise hold the power to tip the very balance of this conflict in the sequel to the critically acclaimed and multi award-winning Company of Heroes. Engage in visceral tactical combat that will define you as a military leader and challenge you to wield the might of the Soviet Empire as you smash your way to Berlin.”

Here’s the Company of Heroes 1 trailer:

Scans can be found at Allgamesbeta.

Are you excited for Company of Heroes 2?