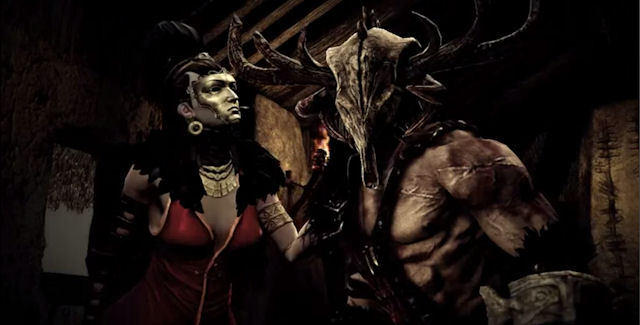 Content: Bloodforge
Price: 1200 Microsoft Points (that’s US$15 / €14.40 / £10.20 / CAN$18.60 / AU$19.80)
Availability: Check availability in your Xbox LIVE region
Dash Text: With a brutal combat system, stunning art style, and a deeply compelling story, “Bloodforge” empowers you to slaughter hordes of demonic soldiers, deformed worshippers, and the gods themselves, using ferocious Rage Kills, devastating Rune attacks, and furious Weapon Combos. Help seal Crom’s fate – and the fate of the rest of the world – in this dark, visceral story of revenge, betrayal, and destiny.

Content: Deep Black: Episode 1
Price: 800 Microsoft Points (that’s US$10 / €9.60 / £6.80 / CAN$12.40 / AU$13.20)
Availability: Check availability in your Xbox LIVE region
Dash Text: A Sci-fi project featuring detailed, action-packed underwater combat which will introduce a new trend in the TPS genre. An Exciting game play that features the dynamic use of both environments for combats: land and underwater. An original multiplayer mode with underwater battles that offer the player a totally different and new experience! Players will descend the murky depths in pursuit of enemies armed with a selection of underwater equipment that range from a specialized suit with jet pack and integrated harpoon as well as other high tech equipment. With the majority of the game play taking place below the water’s surface, action-adventure fans will need to master new skills to fight hostile enemies and to infiltrate enemy bases. The story line takes place in the nearest future in a world of unsteadiness, chaos, espionage, terrorism and the desperate fight for world supremacy and possession of sophisticated biological weapon.

Content: Dragon’s Dogma Demo
Price: Free
Availability: Check availability in your Xbox LIVE region
Dash Text: Whet your appetite with a taste of the high fantasy, open world action that Dragon’s Dogma has to offer in this demo. Battle as an Arisen of the past or rid the countryside of a fearsome magickal beast — the choice is yours. Use the robust character creation tool to customize your Arisen and main pawn, play them in the Countryside Quest now, and import them into the full game later. From height to hairstyle, eye color to nose shape, mold your heroes as you see fit.

Content: Ninja Gaiden 3 Demo
Price: Free
Availability: Check availability in your Xbox LIVE region
Dash Text: Feel the burden of cutting another person down in the latest chapter of the acclaimed action series. Jump into the action as the thrilling battle unfolds in the streets of London. This demo also lets you try out two downloadable weapons—the Falcon’s Talons and the Eclipse Scythe!

This week, Xbox LIVE Gold members can save Microsoft Points on an assortment of select Marketplace items. The special pricing will be available until April 30.