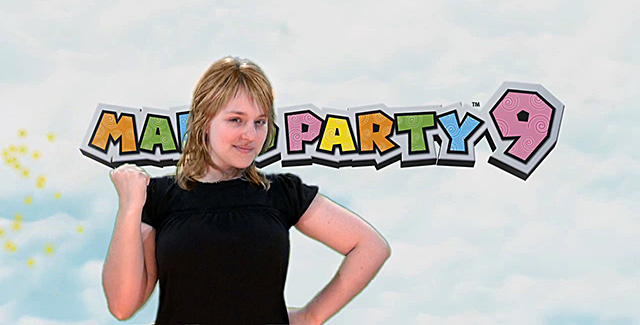 Thanks for stopping by for my review of Mario Party 9. In my video review I will discuss my impression of the story, gameplay, aesthetics, and audio of Mario Party 9. I will also reveal what I consider to be the best and worst aspects of the game. Finally, I will give my recommendation of who I think would enjoy this game.

The story and the characters had me cracking up throughout the game. While gazing up at the beautiful Mushroom Kingdom Mini Stars in the sky, they suddenly get sucked into a black hole. Who could do this? Well, Bowser of course. He thinks the mini stars are pretty and wants them all to himself! So of course, The whole Mushroom Kingdom crew hooks up to try and take the mini stars back!

For the Party Mode of the game, the levels are set up like a tabletop board game. Along the level, mini games and events strewn about to make things interesting. Instead of one at a time, players move all at once through the board in a vehicle. As they progress, they switch places for each turn. The team captain will collect any mini stars on the board and trigger events. The captain also gets to choose the mini game when they pop up. They can either be free-for-all games or the one verses the rest of the crew. There are also boss levels where all the players work together to defeat Bowser’s minions.

The quality of the graphics is standard for Wii games. Each level is uniquely designed and has it’s own charming Mushroom Kingdom theme. The mini game levels are also well designed with distinctive details. Everything in Mario Party 9 is cheerful, even the scary Boo’s Castle level was adorable. Even without speaking, the character were animated with a lot of expression and I often found myself laughing out loud at their antics.

Much of the music in Mario Party 9 is recognizable from other Mario games. The main song is like a marching band song with an uplifting and encouraging melody. It incorporates some of the original Mario theme song but mostly stands on its own. The characters don’t speak other than a few traditional catchphrases or noises.

The best thing about the game is the laid-back atmosphere it creates for gaming with friends. There’s no name-calling or rage quits. Nobody playing Mario Party 9 has something to prove.

The absolutely worst thing about this game is it’s reliance on random chance. On the board the characters move on random dice rolled. Several mini games also rely on chance and it really kills the momentum of the game. For example, the Cheep Cheep fishing game is basically a draw straws game, it require zero skill. But perhaps this was intentional to give younger players a chance to win if they are playing against someone more skilled.

When playing with friends, Mario Party 9 is incredibly fun. The simple, colorful world and familiar characters create a relaxing, friendly competition. Much of the game the players are working together for a common goal of beating Bowser. This is a true party game, in every sense.

Overall, Mario Party 9 is fun to play alone, but better with friends. The solo mode is basically the same as the party mode but against the computer. Sometimes the computer is too easy but will come out of nowhere and beat me anyway due to simply rolling good numbers. Some of the mini-games are available to play on their own in a third person perspective. For some games it adds a unique and fun challenge but for others it makes the games impossibly frustrating. If I could have added anything to Mario Party 9 it would be an online mode. That would drastically improve the replay value.

I recommend this game to any fan of Party games, this is a great addition to the Mario Party series. Any Super Mario fans will probably enjoy the level designs and familiar characters and should give this game a rent for the weekend. I don’t recommend this to anyone who needs cut-throat competition in their gaming. Mario Party 9 will not satisfy your need to destroy your enemies. Personally, I’m glad I own this game and plan on breaking it out several times over the next few weeks.

So, do you plan to pick up Mario Party 9? If you already own Mario Party 9, let me know your impression of it down in the comments below.