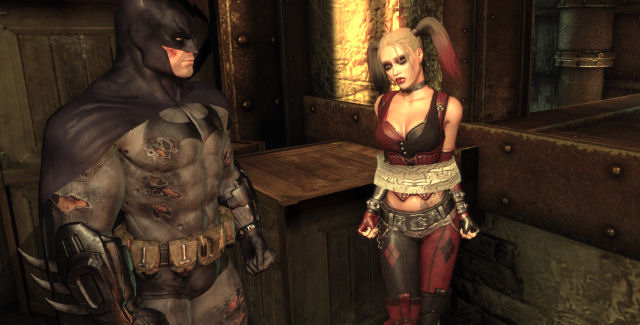 Newly uncovered trophy rewards confirm the next Batman: Arkham City DLC will be called “Harley Quinn’s Revenge”. The 10 trophies suggest Harley Quinn will play the villain and Robin stars as a playable character.

And that’s about time after Robin’s way-too-short cameo in the main game. Let’s hope these new story missions (not Robin or Nightwing challenge maps) will make use of his unique weapons and gadgets. It’ll be nice to get a new gameplay experience different from Batman, just like they did with the Catwoman DLC.

1. Lost Property (Bronze) – No crimefighter should be without this.
2. Breaking and Entering (Bronze) – Find a way into the secret base.
3. How’s It Hanging? (Silver) – Clean up the Dry Docks.
4. The Last Laugh (Silver) – The joke’s on who?
5. Frequent Flyer (Bronze) – Zip Kick 3 different thugs.
6. Battering Ram (Bronze) – Shield Bash 5 different thugs.
7. Snap To It (Bronze) – Snap Flash an unarmed thug, an armed thug, an environmental object and a Titan.
8. Bomb Squad (Bronze) – Defuse all bombs in 3 minutes or less.
9. A Few New Tricks (Bronze) – Use 5 different Quickfire gadgets in one fight as Robin in Harley Quinn’s Revenge.
10. Party’s Over (Silver) – Destroy all Harley Balloons.

Now we’ll have to wait for official confirmation from Warner Bros., which probably won’t be too long. This new DLC should help fans make the wait for Batman: Arkham 3 more bearable.

How do you like the sound of “Harley Quinn’s Revenge”?