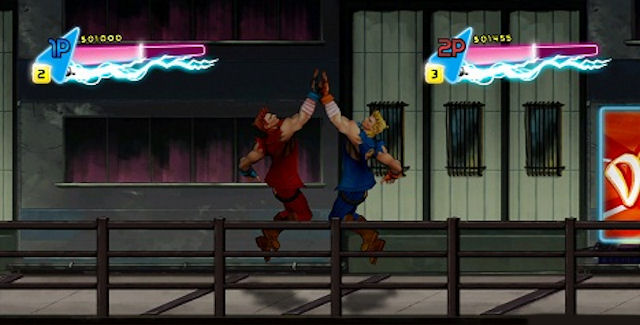 High five! Publisher Majesco has announced that Wayforward Technologies (of BloodRayne: Betrayal & Contra 4 fame) is developing Double Dragon: Neon for the PlayStation Network and Xbox Live Arcade. The classic 2D side-scroller beat ’em up will be released in July 2012.

In true 80’s style, the brothers Billy and Jimmy Lee return (high fiving included as pictured above), as they fight the super evil-sounding villain Skullmageddon and his cronies to save Marian.

IGN was given a preview build of the game and confirms that martial arts allow you to perform combos as you throw, spin kick, and flying knee your way though each neon-lit level. The weapon-based fighting returns as well, as your character can attack enemies using baseball bats, whips, and hand grenades.

The music was also said to be true to the original games, with rock guitar solos, synth drums and keyboards making up the soundtrack of the game. Need a reminder of how the original Double Dragon had the perfect music to beat someone up with (in the game, not for reals yo!) then listen to “The Music of Double Dragon”…