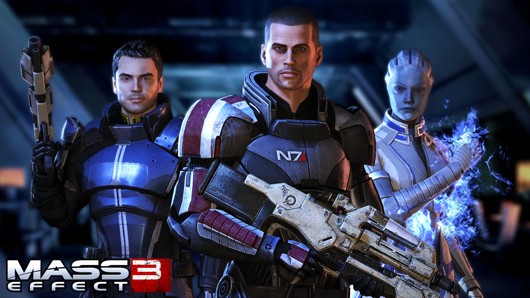 Welcome to another Let’s Talk video with Meg, in which I’ll be talking about Bioware’s highly anticipated, third and final Mass Effect title, Mass Effect 3! This will be both the Mass Effect 3 review and a Mass Effect 3 ending discussion!

“We are legion. The time of our return is coming. Our numbers will darken the sky of every world.” -The Reapers

Just as Sovereign promised all those games ago, the Reapers have arrived and it’ll take a lot more than Shepard’s resolve to get out of this armageddon alive…

Players once again take on the role of the ultimate hero/heroine Commander Shepard in the most anticipated finale to the hugely popular space-faring series; ‘Shep’ and his or her crew must unite the galaxy against the Reaper threat and save all worlds from certain annihilation.

Take a look at the Mass Effect 3 review video!

All in all, 99% of this game was the closest to Mass-Effect-perfection you could achieve!

The romances, the friendships, the heartaches and losses, the action, the score and the high stakes all came together to create a perfect ender to the series.

The ending itself is a sour note of course and for many reasons. But Bioware, who have taken constructive criticisms and feedback on board since Mass Effect 1, has gifted us (the fans) with a voice. I know I am personally grateful for this. So despite the fact that the ending is not what was advertised, I urge gamers and fans alike to be constructive in their criticisms. Be kind.

So, I will give this game an overall fun-factor of 9.8 out of 10! I would have awarded the game-experience a full ten if it hadn’t have been for the ‘downer’ of an ending.

And, If you have finished the game, be sure to check out my initial thoughts and feelings on the ending in this video!

So what did you think of Mass Effect 3? Did it live up to your expectations? Perhaps you aren’t a big fan of the series? Or maybe you feel that the ending ruined the series entirely? Please feel free to leave your own thoughts and opinions in the comment section below!

Side note: all of the tracks in my review video (barring The Host’s ‘In Praise of the Han River, B4-A3’ by Byeong Woo Lee) feature in the Mass Effect 1 and 2 soundtrack. These are, in the order they appear:

And here is a list of the tracks that feature in my ‘Ending Thoughts video.’ They are from the official Fifth Element Score, composed by Eric Serra and bought from iTunes.co.uk: