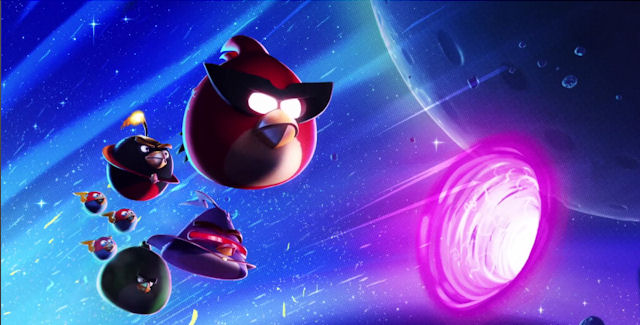 Angry Birds Space tasks players with taking out the pigs by slingshoting various kinds of birds in different directions to take out said pigs encased in physics-based structures. Thanks to the new space setting, the variety of birds have brand new abilities, and lots of zero gravity skill are required to take out all the evil pigs and reclaim the bird eggs. — The strategies are different for every level and structure, they can be taken down with one precise hit or might need continuous bombardments before you can get at the pigs inside.

Here are some in-game tip videos from the Angry Birds Space developers, showing the tips & tricks of how they use the different birds to play the game.

How to play with Bomb Birds:

The Bomb Birds (morphed from Black Birds) are best used to take out tricky defenses with a heat shock wave. They are also the birds of choice if if all your targets are in close proximity to each other.

How to play with Blue Birds:

The Blue Birds split into three missiles after you launch them, by touching the main bird on-screen in mid-air. Once the three birds are split, they are great for setting off chain reactions. This is very helpful because the chain reactions will target different parts of the map all at once.

How to play with Red Birds:

The Red Birds are more powerful than before in their space adventure, so use them to target the wooden pieces first. It’s recommended to start a level by taking out the weaker parts of structures that pigs are hiding behind. This in combination with planetary gravity can result in destabilizing and taking down the rest of bigger structures.

How to play with Terence Birds:

Terence the Bird (morphed from Big Brother Bird) is now a cosmic wrecking ball, easily smashing through the difficult to destroy wooden, stone and ice walls.

How to play with Lazer Birds:

The Lazer Birds (morphed from Yellow Birds) are considered one of the fastest objects in the universe. They can easily turn corners after being launched, by swiping/touching the screen into the direction you want them to go while in mid-air.

How to play with Ice Birds:

The Ice Birds are the all-new extraterrestrial birds, they freeze everything they touch on impact. This allows you to take out an enemy pig even if it’s hidden inside a stone walled fort, because the Ice Bird will simply freeze the wall from the side when it hits, freezing all the enemies far into the inside as well.

How to play with Space Eagle:

Using Space Eagle also adds an Eagle Highscore once a level is completed. Get 100% for an eagle feather, one per level, which adds a minigame element to the game as you try and get all eagle feathers in the game’s episodes.

Three minutes into this video you can see Space Eagle used to beat a level.

Please comment if you need any help or have cheats & tips of your own!
Thank you for visiting!