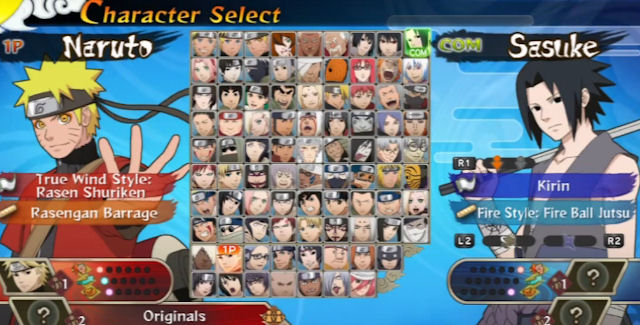 How to unlock all secret Naruto Shippuden Ultimate Ninja Storm Generations characters? That question will be answered in this guide that shows you how and who to unlock to get the full roster of characters on PS3 & Xbox 360.

To unlock all of the 70 playable characters in the game you basically have to finish the Story Mode. If you skip the cutscenes this can be done in 30 to 45 minutes. Or you can get them all with a total of 840,000 Ryo.

To unlock all 15 support character in the game, play a character five times in VS Mode to unlock their support characters. So play VS Mode a few hours with 3 character teams to unlock: Darui, Cee, Chojuro, Ao, Kurotsuchi, Akatsuchi, Fu, Torune, Kurenai, Shizune, Anko, Jirobo, Kidomaru, Sakon, and Tayuya.

This video shows the giant cast of characters in Naruto Shippuden: Ultimate Ninja Storm Generations. It’s got faces from the past VS the newcomers.

Below we’ve listed the 19 secret characters in alphabetical order. Take the following steps to unlock each one.

Unlocking methods missing for some characters like: Gaara, Kid Naruto, Naruto (Sage; his awakening is Nine-Tails Chakra Mode!!), Madara & Sasuke & Itachi Uchiha. As noted above, almost all characters are unlocked once you encounter and beat them in Story Mode or finish their story completely.

Please share character unlocking tips you’ve discovered in the comments section below, we’ll give you credit for it. And if you need help anywhere else, ask away.
Thanks for visiting!