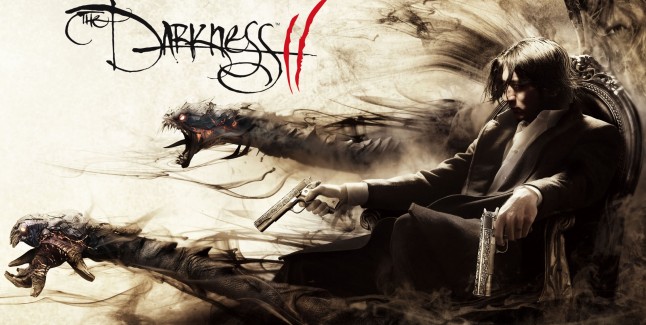 Welcome to another Let’s Talk video, where I will be going over Digital Extremes’ sequel to Starbreeze Studios’ tragic tale, The Darkness II!

“It’s been two years since Jackie Estacado used the power of the Darkness, and now it wants back out…”

Players don the role of Jackie once again in The Darkness II and, after a sudden attack by a new enemy, must call upon the Darkness once more in this action-fuelled, gore-fest!

I want to note that there is little point in comparing The Darkness with The Darkness II as they are completely different experiences!

I will reference the first game (in the video) for those of you who have played it, but remember that just because two is a departure from one, it doesn’t make it any more or less enjoyable, only different!

Take a look at my video review!

All in all The Darkness 2 is a very enjoyable game to play through (if not a little too short at around 4.5-6 hours) and the gameplay makes it!

Though it improves on problems seen in one, they are very hard to compare. Two is a completely different experience overall and though it lacks the depth that made one so unique it’s a fun experience in it’s own right. You could play two having never experienced one and still enjoy it!

This game is so darn enjoyable! It’s like chocolate, you have a bit, and then you just gotta eat the whole bar. Because once you’ve had a taste of it you just gotta keep doing it. I think that’s the gameplay of The Darkness 2, it really is exceptional.

The gameplay, for me, awards this game an overall fun-factor of 8.5!

Points have been taken off purely for the length of the game that, even with the Vendetta extra, is too short in my opinion.

A quick word on the Vendettas Extra:

So what do you think? Did you prefer Starbreeze Studios’ game? Perhaps it put you off playing the sequel? Are you playing The Darkness II and if so what do you like/dislike about it? Please leave your comments and opinions in the section below!

Side note – all of the tracks playing in the background feature in the Darkness II video game. The tracks are as follows: