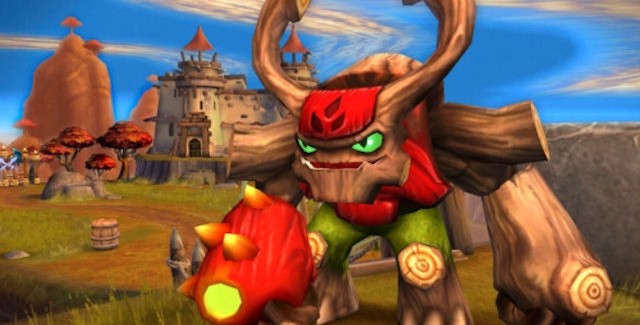 Activision has announced Skylanders Giants, the follow-up to Skylanders Spyro’s Adventure; the most successful kids’ IP launch of the year. It’s part of their premise to “Bring Your Toys To Life”. It’ll introduce 8 new Skylanders Giants!

Skylanders Spyro’s Adventure uniquely combined collectible real-world toys with an epic virtual game world, creating a new platform for communal play that was embraced by parents and kids everywhere. Skylanders Spyro’s Adventure was the #1 best-selling kids’ franchise worldwide in 2011, as well as the #1 overall new IP launched in North America, according to The NPD Group, Charttrack and GfK.

Skylanders Giants builds upon the breakthrough fundamentals of the first game-merging the physical and virtual realms with an innovative line of cross-platform toy figures that have “brains,” which players everywhere can magically bring to life in the world of Skylands.

This next installment of the franchise features a variety of new characters, new challenges, a thrilling new story-driven adventure, and advanced integration across console, handheld, mobile and online:

Here are some quotes from the creators of the game.

“Skylanders Spyro’s Adventure’s success in 2011 validated an exciting idea-that with the right technology, and the creative minds to support it with engaging characters and story, we could define a new model for children’s play,” said Eric Hirshberg, CEO of Activision Publishing. “Skylanders Giants marks the evolution of this core concept. We’ve got super-sized figures, remarkably cool new characters that light up, as if by magic, and more ways to play and explore Skylands than ever before. We’re delighted to announce the title at Toy Fair 2012 and can’t wait for fans to go hands-on this fall.”

Toys”R”Us has reaffirmed its commitment to Activision and the Skylanders franchise, and will remain a marquee retail partner for the launch of Skylanders Giants. “While it was still in development, we recognized the potential that Skylanders had to connect with our customers due to its unique merging of physical and digital play,” said Jerry Storch, Chairman and CEO, Toys”R”Us, Inc. “The game was an enormous success last holiday shopping season, and the toys seem to evaporate as soon as they arrive on our store shelves. We’re excited to continue our enthusiastic support for Skylanders with a comprehensive, global marketing program to introduce Giants to our customers.”

While no systems were confirmed for release, the Wii is definitely getting a version. The original Skylanders game came out on these systems: Wii, PlayStation 3, Xbox 360, PC, Mac, and 3DS. So my guess is this sequel will be released on all those systems as well.