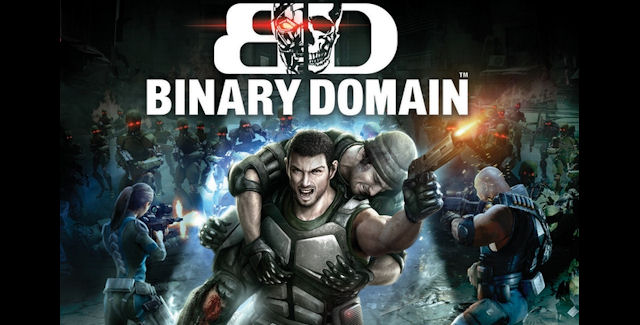 This Binary Domain walkthrough will guide you through the beginning to ending moments of gameplay with strategy tips for this tactical shooter on the Xbox 360 & PS3.

A new take on futuristic Tokyo – Experience an immersive storyline that takes players through the dual layered Tokyo with a run down and derelict lower city and a clean and technologically advanced upper city.

Please note that viewers must be at least 18 to watch, so no harm comes to those with innocent eyes. This game includes Blood and Gore, Intense Violence, Strong Language, Suggestive Themes.

Binary Domain is an original squad-based shooter by Toshihiro Nagoshi, the creator behind some of Sega’s most well-known video game franchises, including the critically acclaimed Yakuza series. Campaign play in Binary Domain features a trust based system in which the maintenance of relationships developed with AI squadmates are crucial if they are to follow orders. The game also features full destructible robot enemies, a wide range of weapons and a robust range of online multiplayer options.

Who is Humanity’s True Enemy?

Binary Domain puts players in the middle of a fast paced and intense battle for humanity against androids called the “Hollow Children” in 2080 Tokyo. Fighting through the derelict lower levels of the city, players control an international peacekeeping squad that soon starts to question their surroundings and the choices they make, especially as they realize that the androids appear to think that they are human and they witness the dramatic divisions within society. In the face of this struggle the question becomes, are these these robots becoming more human, or are humans becoming more like machines?

Gameplay and the Consequence System

Gameplay in the campaign of Binary Domain is single player and mission-based, but uniquely interactive. Players assume the role of Dan Marshall, the leader of a multinational squad of commandos known as the “Rust Crew.” The different characters of the squad each have different skills and personalities which must be exploited. Players are always Dan, but also command all other squad members, communicating with them either through a headset or via their controller. As players progress through the game they build dynamic relationships with AI squadmates based on the overarching cause and effect component of the game known as the Consequence system. Within the Consequence system, the player’s competence in command, as well as their demonstrated understanding of their squadmate’s skills, and even the way they talk to squadmates determines the amount of trust each has in Dan. Maintaining a high level of trust ensures that commands are followed, whereas a low level of trust can result in the opposite. Players can only take a certain number of AI squadmates into missions, and with some skills being exclusive to certain characters, maintaining relationships is crucial in the fight against the Hollow Children and the player’s survival in the field. The Consequence system also affects the way that the campaign of the story plays out, with the use of different characters in different situations influencing events and outcomes.

Dan Arrives in Odaiba and attempts to infiltrate the seawall.

Tip: Press the Back button to display team status information on the HUD.

Dan has infiltrated the seawall and must fight his way through the security forces to reach the slums.

Tip: Purchase first-aid kits and ammunition as well as upgrade your weapons at shopping terminals within stages.

Dan has passed the seawall and now heads to the lower slums to rendezvous with the multinational forces.

Tip: By destroying more enemy parts, you can earn more credits to spend at shopping terminals.

Go to the next page for Chapter 2.