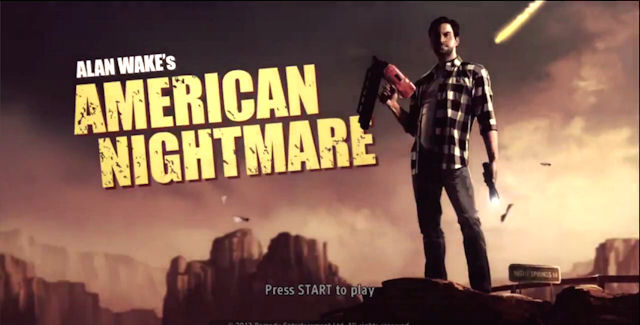 This Alan Wake’s American Nightmare walkthrough will guide you through the beginning to ending moments of gameplay with strategy tips for this action-shooter thriller game on the Xbox 360 exclusively.

Featuring a thrilling pulp action-adventure story mode and an all new “Fight till Dawn” arcade mode, American Nightmare will shine a new light on the world of Wake while appealing to fans and newcomers alike.

Please note that viewers must be at least 13 to watch, so no harm comes to those with innocent eyes. This game includes Blood, Language, Use of Alcohol and Tobacco, Violence.

In this brand new stand-alone digital spin-off experience, Alan Wake fights the herald of darkness, the evil Mr. Scratch! A thrilling new storyline, hordes of creepy enemies, serious firepower and beautiful Arizona locations, combined with a fun and challenging new game mode make this a must for Alan Wake veterans, and the perfect jumping on point for new players! Play the full-fledged Story Mode, and you’ll be on the edge of your seat as you fight to stop your murderous evil double to take back your life… and change reality itself! But there’s more to this nightmare – in the action-packed Arcade Mode, you’ll need to master the Fight with Light mechanic to stay alive until dawn and beat your friends on the Leaderboards. Can you survive until sunrise?

The single player campaign comes from the darkest corners of the ‘Night Springs’, a Twilight Zone inspired fiction. American Nightmare is an exaggerated and gritty rendering of that world — where the horrors of reality have the all too easy habit of coming true. When Wake becomes stuck in the alternate shadowed world of Night Springs, he must hunt down his evil doppelganger, Mr. Scratch, to find the answers. A supernatural serial killer, Scratch has his evil mind fixated on Wake’s wife, Alice, and even more horribly, Wake’s demise. To survive and thrive in the darkest of nights, Wake must learn to control reality itself and unravel the secret to Mr. Scratch’s demise with a trusty flashlight by his side and whatever weapon he can find.

The brand new “Fight till Dawn” arcade mode places Wake in the battle of his life. Players are tasked with surviving a full night of brutal onslaughts while racking up their score. With a myriad of new enemies to battle, Wake won’t have any trouble since he’ll have plenty of deadly options within his arsenal: old stalwarts like the flare gun, wild new favorites like the nail gun and old school Remedy favorites like the Uzi. Thankfully, safe havens and unlockable weapons litter the landscape, allowing for a momentary respite from the darkness. Surviving until dawn is only the beginning though, as online leaderboards pit friends head-to-head to see who the real champion of light is.

Captain Obvious says: Kill the Taken with the flashlight and gun found at the beginning of this chapter.

Leave the canyon you start out in and head to the motel (you can’t miss the signs) to explore it.

Go to the oil field to rewrite reality.

Tip: In the “rewrite reality” sequences you must match the details of your surroundings to those on the page in your inventory.

Tip: Ammo boxes will give you full ammunition for your current weapons, as well as some batteries.

Turn on the lights of the guard building.