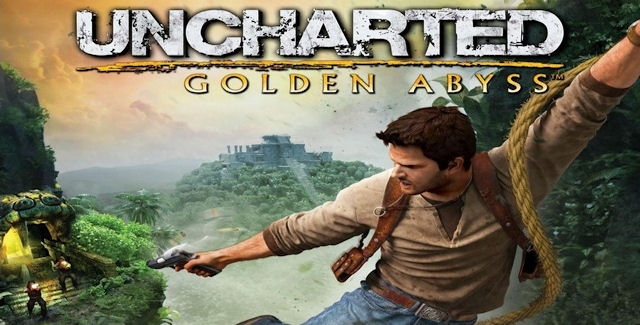 This Uncharted Golden Abyss walkthrough will guide you through the beginning to ending moments of gameplay with strategy tips for this action-adventure platformer on the PlayStation Vita.

Please note that viewers must be at least 16 to watch, so no harm comes to those with innocent eyes. This game includes Blood, Drug Reference, Language, Mild Suggestive Themes, Violence.

Uncharted: Golden Abyss is a single player Adventure game that brings the trademark active gameplay of the Uncharted series to the small screen like never before. The most prominent of the launch title for the Sony PlayStation Vita handheld Golden Abyss features an all-new story revolving around the adventures of treasure hunter Nathan Drake, as well as controls optimized for play on the PS Vita. Features include: a combination of touch pad and motion-sensing controls, as well as Adventure and Puzzle-solving gameplay.

Drake Pushed To The Edge of the Golden Abyss.

Uncover the dark secret behind the 400-year-old massacre of a Spanish expedition as Nathan Drake follows the murderous trail of an ancient and secret Spanish sect. Caught in the middle of a rivalry between his old friend, Jason Dante and Marisa Chase, the granddaughter of an archeologist who has mysteriously vanished without a trace, Nathan Drake races into the treacherous river basins, undiscovered temple ruins and karst caverns of Central America in search of a legendary lost city, only to find himself pushed to the edge of the Golden Abyss.

In addition to the standard analog stick controls found in Golden Abyss, PlayStation Vita’s innovative control set brings a fresh feel to the well-known acrobatic and puzzle-oriented gameplay of the Uncharted game series. Using the handheld’s front and rear touch pads players can more fluidly move laterally, or up and down a wall that Drake must explore. Touch functionality is also used to make charcoal rubbings of found relics, as well as arrange puzzle pieces into the correct configuration for puzzle-solving. Similarly, touch screens can be tapped to move Drake across non-continuous surfaces such as handholds at irregular increments, dilapidated bridge planks and tricky river crossings. Tapping is also utilized as a fast means of switching weapons in combat situations. In addition to this, the motion-sensing controls of the PS Vita’s internal gyroscope allows players to balance Drake as he crosses slippery logs, and serves as an aiming method when shooting at enemies. In the latter situation, just point the Vita in the direction you want to shoot, line up you target and pull the trigger.

Prologue: “I’m Telling You… It Was Drake…”

Chapter 1: “You Ain’t Seen Nothing Yet”

Chapter 3: “Nothing But Some Old Bones”

Chapter 4: “Why’s The Building On Fire?”

Chapter 5: “I’m Not Leaving Without It”