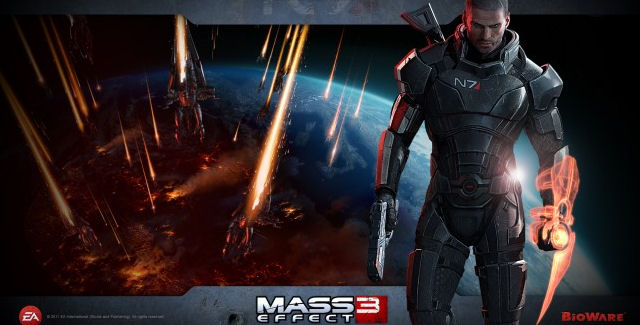 Our Mass Effect 3 walkthrough will guide you through the beginning to ending moments of gameplay with strategy tips for this action-RPG on the Xbox 360, PS3, PC & Wii U.

The Earth is burning. Attacking the planet are a race of terrifying machines called Reapers who came from the Dark Space between galaxies and have now begun destroying the human race that killed their vanguard Sovereign years before. As Commander Shepard, an Alliance Marine, your only hope for saving mankind is to rally all the civilizations of the galaxy together and launch a final mission to take back Earth; before the Reapers use it as a beachhead to destroy all organic life in the known galaxy.

Please note that viewers must be at least 15 to watch, so no harm comes to those with innocent eyes. This game contains strong language and infrequent strong violence. Also, this game may cause you to cry at some points.

Mass Effect 3 is an Action / Role-Playing Game / Third-Person Shooter hybrid set in a Science Fiction universe. Mass Effect 3 is the third game in the popular Mass Effect series, and is rumored to be the final chapter. In this latest game in the series players continue the adventures of Commander Shepard using character customization to make their male or female Shepard their own. Other features include: the ability to import past decisions from both Mass Effect 1 and Mass Effect 2 into Mass Effect 3 to affect the story’s outcome (although it’s not required as you can manually set it at the start of the game as well and jump right into the story), customization of your weapons, improved mobility and melee combat, many returning characters to join your squad of team mates (if they weren’t killed off in previous imported games), and a better cover system to let you really get into the action.

Let’s join Commander Shepard in the struggle against the Reapers in the conclusion to the Mass Effect Trilogy.

It’s possible not everyone will survive. As an ancient alien race, known only as Reapers, has launched an all-out invasion in the Milky Way Galaxy leaving nothing but a trail of destruction in their wake. Earth has been taken, the galaxy is on the verge of total annihilation, and you are the only one who can stop the Reaper threat once and for all. The price of failure is extinction. You are Commander Shepard, a character that you can forge in your own male/female image. You determine how events will play out, which planets to explore, and whom to form alliances with as you unite the races of the galaxy into a force big enough to eliminate the Reapers.

How you wage this war is completely up to you: go into combat with guns blazing or use cover to plan a more tactical assault. Utilize your squad to full effect (voice-commands support for Microsoft’s Kinect sensor included on the Xbox 360 version) or take a lone wolf approach and be stealthy about your actions. Rain death from a distance or go head-to-head with enemies using devastating melee attacks. Mass Effect 3 will react to each decision you make as you play through a truly unique experience of your own creation. In this epic conclusion of the Mass Effect Trilogy, the fate of the galaxy is in your hands!

Why should I download the From Ashes story DLC before playing Mass Effect 3? And how do I access the mission and squad mate?

How do I get Mass Effect 3: From Ashes?

From Ashes comes with the Collector’s Edition of Mass Effect 3 at no extra cost, and can be purchased for $10 via Origin and the Playstation Store, or for 800 Microsoft Points from the Xbox Live Marketplace.

This is automatically done at the start of the game via a prompt screen. To import your Commander Shepard into Mass Effect 3, you must have completed the game in your Mass Effect 2 save file (where Shepard survives the ending) in order to import it into Mass Effect 3. — PC gamers need not worry, Origin can import Steam version save files.

If you’ve saved your Xbox 360 version of the endgame Mass Effect 2 save file in the Cloud, then you cannot import that save directly into Mass Effect 3. Instead you should copy that file back onto your Xbox 360 hard drive where it originated and then try importing again. — A last resort effort might make it possible to not have all your past work be in vain, it’s to reload a non-original save game near the end of Mass Effect 2 and then “re-finish” the game to populate a new endgame save. Unfortunately Electronic Arts have said they cannot guarantee that this will work with certainty.

How to get extra Readiness Rating & Weapons from iOS Mass Effect games into Mass Effect 3?

Currently there are two iOS games that support this option. They will be released during the Mass Effect 3 launch week.

In the Mass Effect 3: Infiltrator: (on iPhone, iPod Touch, and iPad)

In the game be sure to gather intel by checking dead enemies to see if they dropped Intel, which can be (traded for credits or) uploaded to boost your Galactic Readiness Rating in Mass Effect 3.
Mass Effect 3: Infiltrator will also let players to unlock exclusive weapons for use in Mass Effect 3, while it’s unknown what these weapons could be, they are most likely unlocked by finishing the game to the end.

In the Mass Effect 3 Datapad: (iPad-only)

The Galaxy At War section allows players to earn Readiness Rating in Mass Effect 3 by playing the fleet appointment game. The player must be signed into the same Origin account on both their iOS device and the system they are playing on (Xbox 360, PS3, PC). An active internet connection is required to access Galaxy At War. (In addition to readiness rating players will also earn credits for completing missions. Credits can be used to purchase upgrades.)

What are the minimum system requirements for Mass Effect 3 on PC?

What are the recommended system requirements for Mass Effect 3 on PC?

Not at all. Mass Effect 3 works great as a stand alone story for new players not familiar with the franchise, or those that may have missed one of the previous titles. However, those that have played Mass Effect 1 and 2 will find a continuation of the storyline and characters.

What character classes can I play as?

All six classes from the full game are included:

Can I customize my character?

Yes. Players will be able to create a male or female Shepard (also affectionately called FemShep), customize their appearance, and level up their character’s abilities and powers.

Can I make my Shepard look like the one I made in Mass Effect 2?

Yes. You can customize Shepard for Mass Effect 3, and can input the code from your previous game’s customization if desired. During single-player setup, choose Custom Appearance and then Code. You’ll need to enter the code just as it appears in the previous video game.

What are the differences between the “Action, “Role-Playing”, or “Story” select settings?

Mass Effect 3 gives players the ability to tailor the play experience to their choosing. To that end you get three choices to play the game:

When will Mass Effect 3 be released in my country?

* Rest of Europe and all other countries Release on Fri 09 Mar, 00:01 GMT/BST including:
Ireland (IE)
Italy (IT)
Poland (PL)
Portugal (PO)
South Africa (ZA)
United Kingdom (GB)
All other countries unlock with EU2 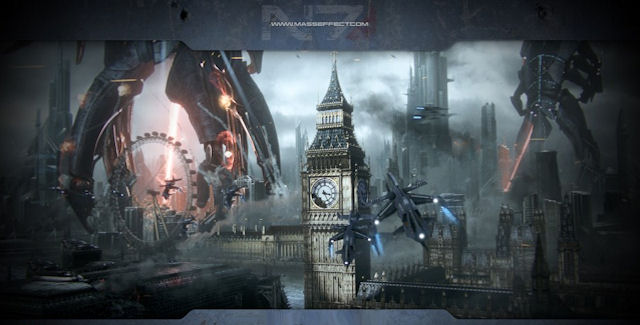 In 2157, humanity discovered it was not alone in the universe.

Thirty years later, they found a peaceful place among dozens of galactic species. But this idyllic future is overshadowed by a dark past: Reapers, a sentient race of machines responsible for cleansing the galaxy of all organic life every 50,000 years, are about to return. The leaders of the galaxy are paralyzed by indecision, unable to accept the legend of the Reapers as fact. But one soldier has seen the legend come to life.

And now, the fate of the galaxy depends on him. The Reapers have invaded Earth and Shepard leaves to speak to the Council to help stop the Reaper threat.

Good to see Ashley Williams will return to your crew in Mass Effect 3.

As you can tell this Mass Effect 3 walkthrough will be played with a mix between Paragon (good) and Renegade (evil) actions.

The Normandy has been sent to Mars to locate Prothean data, but the Archives are not responding. Investigate the dig site to find the data. You’ll soon be faced with Cerberus forces sent by the Illusive Man.

Tip: From your Mission Computer, choose Squad to reach the Powers Level-Up Progress menu, where you can exchange collected Points for Upgrades. Be sure to start out by using your Level-Up Points to upgrade Shepard’s abilities (especially strength at first) to the maximum.

Here the in-game control instructions continue and you need to learn how to perform a Quick-Kill on a Cerberus Trooper.

Personal notes from S. Esparza about the Prothean discovery reads: We haven’t been able to decipher much — if any — of the language yet, but the visual documentation gives us some idea as to what they were studying. Namely, us. They seemed particularly interested in early humanity’s evolutionary process, judging by the way they organized their files and highlighted specific occasions. It seems a bit fantastic to write this, but everything indicates that they seemed to be trying to chart the curve of humanity’s intellectual progression.

Research notes from J. Tasmen read: The last location seems to have run dry, but judging from the communications system layout and the backup power supplies equipped by the first Prothean research base we discovered, we think a secondary base may be located deeper underground. We’re going to need permission from the Powers That Be to excavate further, but considering the recent renewal in enthusiasm for the work we’re doing here, I don’t think clearance will be an issue.

On the next page we continue the walkthrough with Chapter 2: The Citadel.