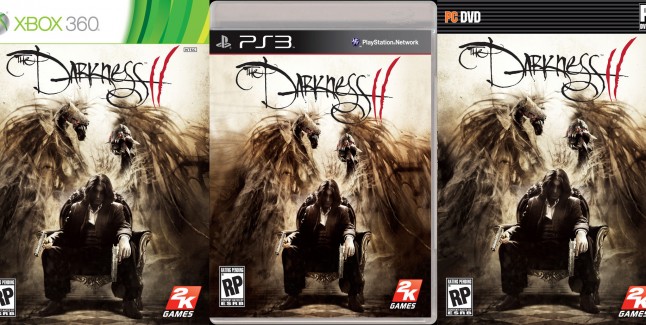 Video Games Blogger and 2K Games are teaming up to give you the chance to win one of three copies of The Darkness 2! One copy is available for each of the systems the game is released on: Xbox 360, PlayStation 3 and PC.

To enter, please answer the following question in the comments section below:
“Why do you want to play The Darkness 2? And on what system?”

What’s new in The Darkness 2

The Darkness 2 is be available for the Xbox 360, PS3, and PC from February 7th, 2012. You can order it via EmbraceTheDarkness.com.

To play the game first-hand, you can try The Darkness 2 Demo right here on VGB!

To see what the game’s all about, you can watch The Darkness 2 launch trailer:

The details: The Darkness II takes place two years after the events of the first game, as Jackie Estacado, the current wielder of The Darkness has used his powers to become the Don of the Franchetti crime family. He has been unable to shake the thoughts of his dead girlfriend Jenny Romano and has since, with the help of estranged occultist Johnny Powell and his study into dark essence, contained his supernatural powers and now The Darkness “wants out in the worst way”. In The Darkness II, you’ll once again take control of Jackie as he struggles with the powers of the Darkness.

While the original Darkness was developed by Starbreeze Studios, this time around Digital Extremes are in charge and have given The Darkness II a deeper “graphic noir” visual style. The style was achieved with the development artists hand painting the majority of the game assets, instead of relying on digital methods to create a comic book style. There have been substantial additions to the gameplay since Jackie’s last go-round, including the exciting new “quad wielding”feature, in which Jackie can use The Darkness while at the same time use firearms. There’s also a new feature where Jackie collects his “dark essence” – a substance that clings to people and objects that have come in contact with The Darkness. This can be used to make purchases from a tree of abilities from ‘talent shrines’, such as ‘Black Hole’ which allows Jackie to charge a enemies’ heart with energy and throw it to create a void of vacumned darkness, the ability to see and attack through walls, ‘Swarm’ which allows Jackie to disable and stun multable enemies at once, and ‘Gun Channeling’ which gives Jackie unlimited ammunition and deals supernatural damage for a short period of time.

As with the original game, the legendary musician and voice actor, Mike Patton will reprise his role as the voice of the The Darkness. The unbelievably prolific Patton, whose credits include genre-busting music acts (Faith No More, Peeping Tom, Fantomas) major studio films (I Am Legend) and video games (Left For Dead, Portal, and Bionic Commando), stated that “It feels really good to be the bad guy, and The Darkness is as bad as it gets. I’ve read through the script, and Jackie is going to be a brutally tortured soul. I’m looking forward to making his life a living hell.”

Take a look at the awesome Powers of The Darkness: Quad-Wielding! Two guns and two demon arms work in tandem to create an overwhelming amount of destruction.

Leave one comment per person on this page with your answer. The winners must be located in America or Canada, since it’s the American versions of the game on Xbox 360, PS3 & PC. Winners will either be chosen by a random number generator or be picked based on who has the most enthusiasm for the game. Contest ends 11:59PM PT on Sunday, February 19th. For legal reasons, if you’re younger than 18 years you need to get permission from a parent or guardian to enter the contest, not to mention the game is rated M for Mature. The winners will be picked the next week, at which point we’ll email them instructions to claim their prize.

Fill out your real email in the indicated “Email” field when posting your comment by pressing the “Post As” button, so we can contact you if you win. Note that your email will be invisible to other readers, only the site staff can see it.