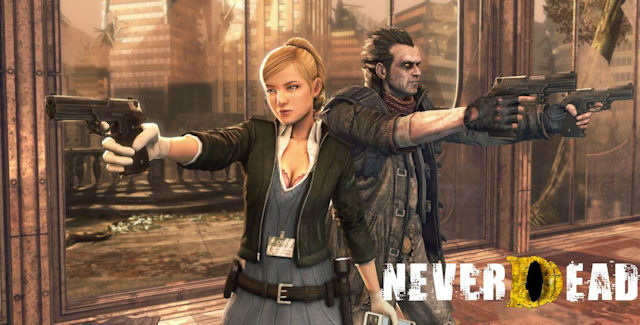 This NeverDead walkthrough will guide you through the beginning to ending moments of gameplay with strategy tips for this action-packed shooter on the Xbox 360 & PS3.

NeverDead is a third person action/shooter offering a radically new game experience within the genre based on decapitation and regeneration. Lose any limb and still have the ability to endure the fight as death has already passed you by.

Please note that viewers must be at least 18 to watch, so no harm comes to those with innocent eyes. This game includes Blood and Gore, Intense Violence, Language.

Over 500 years have passed since a mortal named Bryce Boltzmann endured a life-altering tragedy at the hands of Astaroth, the Demon King. His wife murdered, left defeated and rendered immortal, he now moves through life without aspirations other than where he will find his next drink. Lending a hand to the clandestine group, the National Anti-Demon Agency(NADA), he pursues redemption through the extermination of demonic forces within the modern day world along with his agency partner, Arcadia.

Tip: Use the Spin Attack when reduced to a head to kill or evade Grandbabies. Your head spin attack can also be used to smash obstacles out of the way.

In this Museum chapter you better get ready for some self-decapitation.

Combat Tip: Try to crush Demons with the environment.

Tip: Flames and Electrical units give you additional combat strength.

Note: You can do this section best by shooting them when the shield is up.